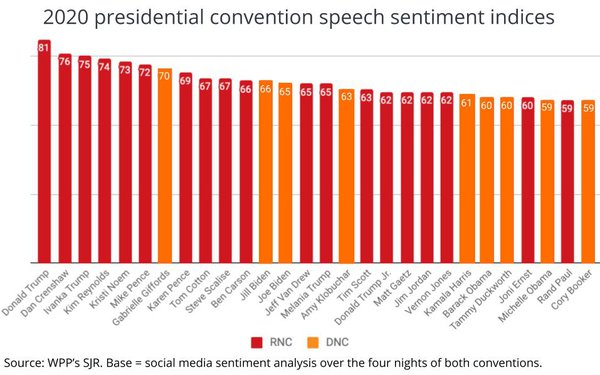 The analysis shows the incumbent President generating the highest overall sentiment -- and index of 81 -- followed by five other GOP speakers (Dan Crenshaw, Ivanka Trump, Kim Reynolds, Kristi Noem and Mike Pence) before a DNC speaker ranks: Gabrielle Giffords with a sentiment index of 70.

The index is the net difference between social media posts deemed to be positive vs. those judged negative, according to SJR's methodology.

"In short, we scraped the digital landscape to measure public perception," explains Steve Hirsch, director of account strategy at SJR, noting: "Effectively, every post across social feeds, media stories, Reddit threads, etc. are given a ‘positive’, ‘neutral’ or ‘negative’ tag, and that yields an index score from 0-100."

Democratic convention speakers, meanwhile, dominated the net negative rankings, although GOP speaker Secretary of State Mike Pompeo had the most negative ranking of all with an index of just 35.

SJR's sentiment analysis is based on a proprietary machine-learning algorithm developed to analyze text, emojis and engagement metrics.

Asked why Republican convention speakers performed so much better than Democratic convention speakers, SJR's Hirsch said, "We think it largely comes down to the reality that Trump voters are more enthusiastic about Trump than Biden voters are about Biden. On the Democrat side, you have a few different factions, like those who support more progressive viewpoints (i.e. Sanders/AOC) vs. those who are more moderate. The DNC featured a number of speakers who aren’t necessarily as gung-ho about Biden as many of the RNC speakers were about Trump."

He said the analysis explicitly factored out paid trolls, bots and hostile foreign actors who may have been posting negative sentiment to disrupt political perceptions.

The SJR analysis is purely qualitative and does not take into account the volume of social media references circulating around each speaker, but by at least one metric -- Nielsen ratings -- Democrats beat Republicans by a significant margin.

The four-night average television audience for the RNC (19.4 million viewers) was 10.2% lower than the four-night DNC average (21.6 million), according to a Marketing Politics Weekly analysis of Nielsen's data. 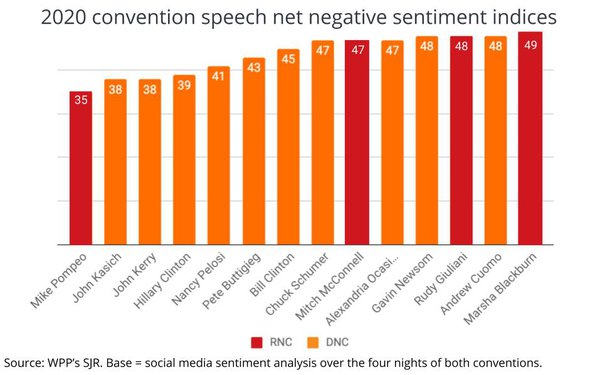