How Facebook Can Really Help Democracy: Go Dark For 60 Days

It’s both ironic and fitting that as soon as Mark Zuckerberg posted news about new steps Facebook is taking to combat turmoil before, during and after the Presidential election, it was immediately flooded with tumultuous comments spreading cynicism and division.

“Then stop trying to influence the election by silencing one party if you want to protect democracy. Just encourage people to vote,” was the “most relevant” comment replying to Zuckerberg’s post, according to Facebook’s algorithm.

“In other words you are controlling conservatives during this election process. It won’t work.”

“Mark and your associates, we know that you’re supporting democrats but your wishes will not prevail over people’s power.”

“Who are you to have any say over the election. It should be voting, counting the votes and announcing Donald J. Trump as President of The United States of America. GOD Bless President Trump.”

“How thoughtful! Zuckerberg is warning us in advance that he plans to do massive censorship! It's just coincidental that the vast majority of that censorship will be against Pro-Trump or conservative comments.”

“Trying to save democracy while destroying free speech at the same time? That won't work!”

I could go on, but you get the idea. Whether those were genuine user comments, or ones posted by bots, organized trolls, or hostile foreign actors, no one -- not even Facebook -- may actually know.

But the point is that Facebook -- and American democracy -- are in a no-win situation, because social media has become weaponized, pure and simple, and the only step Zuckerberg could possibly take to actually stop Facebook from playing a role in spreading disinformation, division and confusion is to put the social network on hiatus for the next 60 days.

I know that’s not going to happen for so many reasons -- especially the ones that are the chief concerns of publicly traded companies like FB -- but a self-imposed Facebook blackout for the 60 days leading up to the election really is the only way it could play a positive role in this year’s election.

Zuck’s baby steps like not accepting “new” political ads one week before the election, promoting voter registration, and shutting down clear and present dangers are minimally viable steps any good actor should take, but if Facebook really cared about democracy, it would simply shut itself down for the 60-day period.

Perhaps the biggest reason that won’t happen is that Zuckerberg knows that after two months of living without Facebook, many users simply wouldn’t come back. 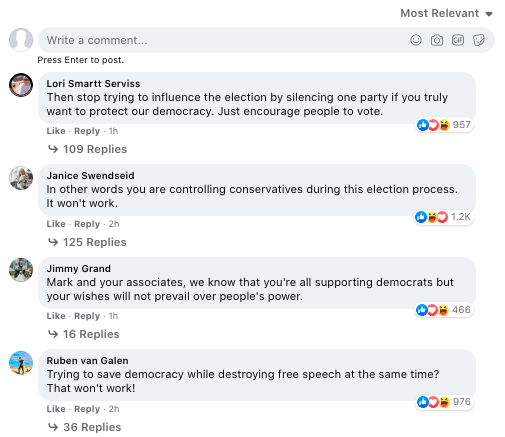