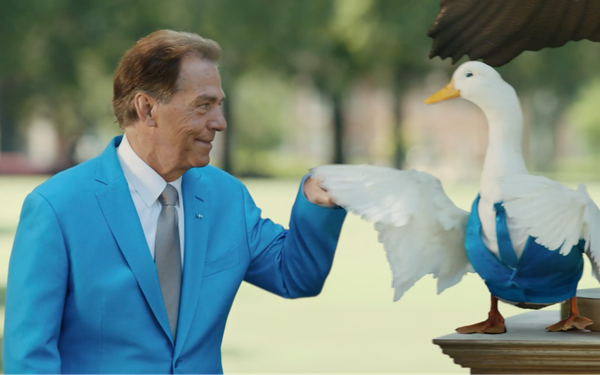 This year’s college football season is in jeopardy with the Big Ten’s decision not to play.

But Alfac is bringing back the University of Alabama’s coach Nick Saban for a campaign from Dagger launching Thursday. Saban recently made the news when he stood with his Black players and led a Black Lives Matter march across campus that included hundreds of the university’s athletes, coaches and staff.

Although fall traditionally is all about football, COVID-19 means sports will be different for months to come, says Valencia Mitchell, Aflac’s vice president of brand strategy, insights, and marketing.

“Our new spots give consumers a taste of fall football by taking them inside the ‘Aflac Program," Mitchell said in a release. "At the same time, they give us a unique opportunity to show cash-strapped consumers that during difficult times our policies have more value than ever.”

While the campaign delivers the signature laughs people have come to expect from the Aflac duck, it also reminds consumers of “the solid and predictable,” Patton says.

“Go Time” features Coach Saban, the Duck, and Aflac team members as they dig in to talk about how Aflac works. Coach Saban leads an impromptu quiz, and members show they’ve studied their playbooks by accurately stating that Aflac helps with expenses health insurance doesn’t cover.

A second spot, “Film Room,” will air later this year.

The campaign includes social media, public relations  and messaging for business owners. In addition to continuing its national media focus with ESPN/ABC, the ACC Network, and the SEC on CBS, Aflac is entering the second year of its partnership with the Southeastern Conference and the SEC Network.

This is the second year that Aflac has teamed with the football coach for a campaign.  Last year’s spot showed Saban sitting alongside the Aflac Duck on a couch and ended with Saban's NCAA championship rings.