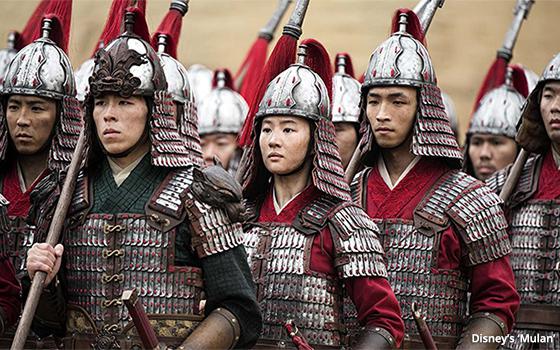 Walt Disney’s “Mulan” -- a major planned theatrical-movie release that shifted to a streaming release due to the pandemic -- reaped big results this Labor Day weekend.

Samba TV, a viewer tracking company for smart TVs, says the movie, which is running on Disney+, pulled in an estimated $33.5 million in revenue, and was seen in some 1.12 million U.S. TV homes.

These results are based on the “Mulan” $29.99 price tag under Disney+’s “Premium Access” service, Samba TV says.

In addition, the movie was the number one most-watched movie among two million Reelgood users --  getting a 14.5% share of all streams from September 4 through September 7.

"Mulan" ran on the same weekend this past holiday weekend as “Tenet,” a big Warner Bros. theatrical movie that pulled in $20.2 million in theatrical box-office revenue.

Compared to higher streaming price tags for the likes of “Mulan” and other films, the average theatrical price tag ticket in the fourth quarter of 2019 was $9.37, according to National Association of Theater Owners.

By way of comparison, Universal Studios’ “Trolls World Tour” -- which also opted to forego theatrical release for a premium streaming release -- took in $100 million over a three-week period in April. “Trolls” was priced at $19.99 for a 48-hour rental.

Following the movie’s streaming run -- and after some testy words from a senior executive at AMC Theaters, the largest U.S theater chain, concerning Universal’s intent to stream more movies originally intended for movie theaters --  the two companies agreed to a deal in which AMC would get a piece of streaming revenues.

In return, AMC Theaters agreed to cut its traditional exclusive theatrical window for Universal to just 17 days  --  down from 90 days -- which will allow Universal to benefit from higher non-theatrical/streaming revenues.