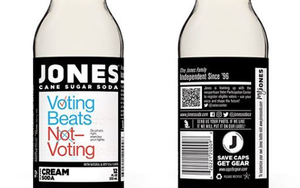 It’s a GenZ-focused initiative aimed at encouraging voting in an election year when COVID-19 has sidelined many traditional in-person, voter-engagement activities.

Last week, Jones rolled out some 500,000 soda bottles bearing designs created by artists and consumers. Front-label graphics range from a “Voting Beats Not Voting” message to a nine-time repetition of the word “Vote” superimposed over an image of the Statue of Liberty.

A QR code on the back label enables online voter registration in about two minutes with a driver’s license or state identification card, in conjunction with the non-profit Voter Participation Center (VPC).

By activating the code, eligible citizens can check their registration status, register to vote and see information on voting guidelines and state registration deadlines.

"We were very deliberate in being nonpartisan and just enabling people to have their voice heard,” Jones vice president of marketing Maisie Antoniello tells Marketing Daily.

Asked why the company chose cream soda to bear the QR codes, Antoniello adds, “It’s only on cream soda because we didn’t want to pick a color. It’s neutral. And it also happens to be one of our most widely distributed flavors.”

“Everyone who buys a Jones Soda looks closely at the labels because they’re fun and constantly changing,” VPC president and CEO Tom Lopach said in a statement. “So it’s a great opportunity for us to both call attention to the importance of voting and enable people to register on the spot simply by using their smartphones.”

Jones considers itself a “craft” soda marketer, offering bottled, carbonated beverages. In early 2016 it entered the non-carbonated space with the launch of canned Lemoncocco, with lemon and coconut flavoring.

Those ads began with a Jones-branded recreational vehicle carrying Hawk and his family on a 10-day tour with stops that included a bison range, various national parks and multiple skate parks.