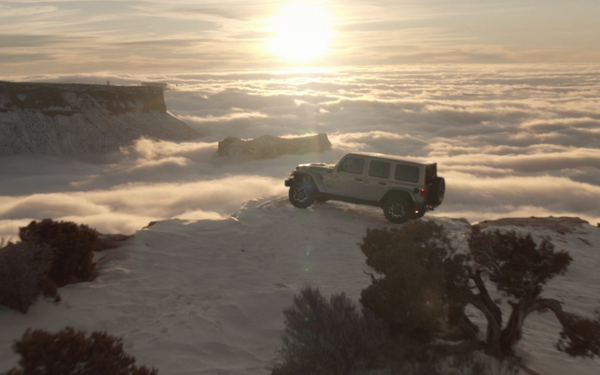 Fiat Chrysler Automobiles is debuting a video featuring the voice of Carl Sagan to launch a new electric Jeep Wrangler.

“Pale Blue Dot” was created by FCA roster agency Doner in partnership with Emmy Award-winning American writer and producer Ann Druyan, who was married to Sagan from 1981 until his death in 1996.

The 90-second spot, which includes music from noted composer Philip Glass, will debut on Sept. 22 during the U.S broadcast premiere of “Cosmos: Possible Worlds” on Fox at 8 p.m.

For every completed view of the video on the Jeep brand’s YouTube channel, the brand will make a donation to combat climate change. Jeep paid a licensing fee for the use of the soliloquy, in addition to the contributions, which will be made to the Coalition For Rainforest Nations and the Carl Sagan Institute Of Cornell University to combat climate change.

Francois says Doner came up with the creative concept four years ago as a possibility for Jeep’s 75th anniversary advertising, but another idea was chosen instead with the hope of returning to the Sagan-themed creative when the message was more appropriate.

Jeep Wrangler 4xe models will be available in Europe, China and the United States by early 2021. The Jeep Renegade 4xe and Compass 4xe models began arriving in Europe this summer. The new Jeep 4xe models follow the introduction of the Jeep Grand Commander PHEV in China last year.

On Feb. 14, 1990, Sagan gave the world a a new look at the earth. In 1981, Sagan lobbying NASA, to turn Voyager 1’s camera for one last look homeward, once it had completed the first reconnaissance of the outer planets. The resulting image, with the earth appearing as a tiny speck, from out beyond Neptune, almost 4 billion miles away, became known as "the pale blue dot."

The Jeep brand’s video includes passages from Sagan’s 1994 book, "Pale Blue Dot: A Vision of the Human Future in Space”, in which he spoke in-depth about the photograph.

“For obvious reasons, I asked him to please come back to me when Fiat Chrysler made an electric Jeep,” she says in a release. “Exactly two years passed and he called, saying ‘We made you a car, Annie.’  In addition, he had the idea that the ‘Pale Blue Dot’ announcement could become a kind of earth-friendly engine of its own, generating contributions for the two environmental nonprofits of my choice."

FCA feels “a big responsibility” to market the electric Jeep model properly, because “it is not just a technical upgrade, it is a new chapter that opens for the brand,” Francois says. “The core of the brand’s DNA is exploration, adventure and freedom, so our customers already have a deep and powerful relationship with nature and with our planet. “

Francois says he gets emotional every time he watches the spot, which he calls “a love letter to the planet.”

He says he felt “an enormous duty” to protect Sagan and his wife’s legacy “and also advocate for this universal message of caring for our planet” which viewers can do by watching the video (and triggering the donations.)

The planets aligned, so to speak, he says in that the timing of the campaign coincides with the new “Cosmos” series, which Jeep is sponsoring.

“Another kind of alignment is the timing [of it debuting] during COVID-19,” he says. “The planet is calling for more responsible behavior.”