Got A New Streaming Service? Add A Plus Sign 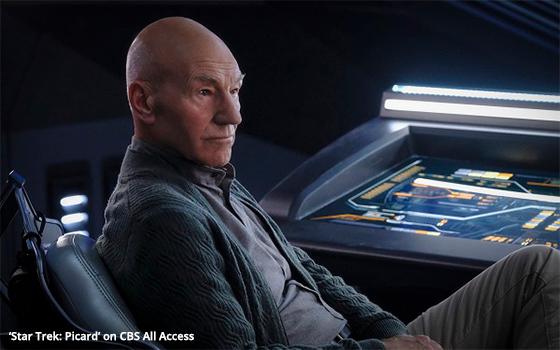 For the third time in the subscription streaming era, a new service will use a plus sign in its name.

Already seen since last year in the names of Disney+ and Apple TV+, the plus sign best known for its use in simple arithmetic will now be affixed to the brand-name of Paramount to create Paramount+.

This is the new name announced Tuesday by ViacomCBS for the company’s current and soon-to-be-expanded streaming service, CBS All Access.

As the soon-to-be-obsolete name implies, CBS All Access is the subscription streaming service for all things CBS, the former corporation from which it sprang.

It is also the place to go for various “Star Trek” spinoffs that have been recently produced for the service, such as “Star Trek: Picard” starring Patrick Stewart (pictured above).

The new Paramount+ will encompass much more -- namely, content from as many of ViacomCBS’ properties as the company can pour into it.

In preparation for the rebranding scheduled for next year, CBS All Access has already been expanding its offerings of content from other ViacomCBS entities such as Nickelodeon, BET, MTV, Comedy Central, Smithsonian and Paramount Pictures.

It is from this last storied Hollywood studio that Paramount+ is getting its name. Evidently, the powers that be at ViacomCBS felt that the Paramount brand was the strongest one it possesses in its arsenal of corporate brand names to serve as an umbrella for the company’s all-encompassing streaming service.

Other sprawling companies -- including Disney, Apple, NBCUniversal and WarnerMedia -- faced the same challenge in naming their streaming services.

Decision-makers at Disney and Apple apparently felt that simply using their very well-known corporate brand names would suffice, which makes perfect sense. The plus signs they added seem superfluous, since they do not really mean anything.

Perhaps they felt that the plus sign would be a better and less verbose way of distinguishing their streaming services from the rest of the company without having to say “Disney Streaming” or “Apple TV SVOD” (if the acronym “SVOD” is still in wide use).

It is worth noting that at no time did Disney seem to consider using the brand name “ABC” in its streaming service name. Like “CBS,” ABC is not nearly big enough today to encompass all that Disney offers on Disney+.

“NBC” was apparently not big enough for NBCUniversal’s streaming service either. Instead, it named its service “Peacock” -- which is an allusion to NBC, but in this context, it is intended to encompass so much more.

WarnerMedia, however, did go with one of its network brand names for its streaming service -- HBO, as in HBO Max.

Like ViacomCBS, WarnerMedia might have gone with some derivation of its old studio name -- “Warner,” as in “Warner+” or “Warner Max.”

In choosing “Paramount,” ViacomCBS did what WarnerMedia apparently declined to do -- using the name of the old Hollywood studio it owns for the name of the pay-TV service on which it is staking its future.

At ViacomCBS, the choice may have come down to its three biggest corporate brand names -- Paramount, CBS and Viacom.

The TV Blog’s bet is that CBS fell out of the list first, leaving Paramount and Viacom as the two finalists.

If the name “Paramount” is better known to the general public than Viacom, it is likely due more to Paramount’s landmark status in Hollywood symbolized by its iconic, grandiose front gate than by the many productions that emanated from its famous lot and executive offices -- everything from the first Marx Brothers movies and “The Godfather” to “Entertainment Tonight” and “Frasier.”

So, Paramount it is -- the name of an entertainment company founded in 1912, and now part of a TV streaming service’s name 108 years later in 2020.

brand image, digital, streaming, television
2 comments about "Got A New Streaming Service? Add A Plus Sign".
Check to receive email when comments are posted.
Read more comments >
Next story loading