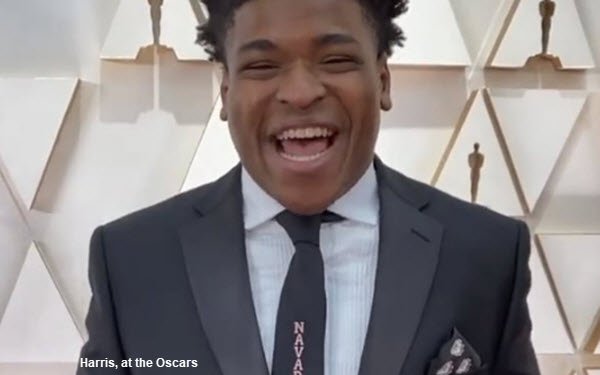 Netflix took double hits on Thursday, as a child-pornography scandal involving one of its docuseries stars made headlines —just as House Republicans petitioned Attorney General William Barr to prosecute the streaming service for “child pornography” over the French film “Cuties.”

Jerry Harris, who achieved celebrity this year as the star of Netflix’s “Cheer” docuseries, was arrested by FBI agents and charged with a one count of production of child pornography.

The complaint alleges that Harris “repeatedly coerced minors to send him obscene photos and videos of themselves, and solicited sex from boys as young as 13 at cheerleading competitions,” reports The Chicago Tribune.

According to federal court records, Harris “admitted to agents that he solicited and received explicit messages on Snapchat from at least 10 to 15 individuals he knew were minors, had sex with a 15-year-old at a cheerleading competition in 2019 and paid a 17-year-old money in exchange for nude photos,” according to USA Today, which first reported on the news.

Harris, a Naperville, Illinois native, was arraigned in the Dirksen U.S. Courthouse in Chicago, and is in custody pending a hearing scheduled for Monday.

Netflix issued a statement in response to Harris’ arrest, saying: “Like everyone, we are shocked by this news. Any abuse of minors is a terrible crime and we respect the legal process.”

In recent months, Harris has worked as an Oscars red-carpet correspondent for the “Ellen” show, guested in a sketch on “The Late Show with Stephen Colbert,” and shared a stage with Oprah Winfrey, among other media appearances, notes The Tribune.

He has also racked up more than 1.2 million Instagram followers, and partnered with several brands. One of those, Schmidt’s deodorant, told The Tribune on Thursday: “Schmidt’s is firmly committed to ensuring a safe environment for everyone. While we partnered with Jerry from May through July of 2020, we are no longer working with him.”

But the arrest and its timing are particularly bad news for Netflix, which was already struggling with a growing social media controversy over “Cuties,” including a campaign to encourage subscriber cancellations.

Netflix and the film’s award-winning director, Maïmouna Doucouré, have explained that “Cuties,” which tells the story of an 11-year-old Sengalese Muslim girl, is actually “a social commentary against the sexualization of young children.”

“It’s an award-winning film and a powerful story about the pressure young girls face on social media and from society more generally growing up — and we’d encourage anyone who cares about these important issues to watch the movie,” Netflix said in a recent statement.

In August, Netflix apologized for and stopped using promotional images for the film that showed girls in suggestive poses. Nevertheless, a Change.org petition posted that month that called for Netflix to cancel the Sept. 9 release of “Cuties” drew more than 160,000 signatures.

And with politicization of the current norm on social media, anti-Netflix messaging and #CancelNetflix have continued to gather momentum.

During the weekend following the film’s Sept. 9 debut on the streamer, the hashtag was a top-trender on Twitter, according to YipitData, which also told various media that Netflix’s U.S. subscriber cancellation rate on Sept. 12 was nearly eight times higher than the average daily levels recorded in August.

But YipitData declined to provide estimates of actual cancellation numbers. The real impact of the “Cuties” controversy on Netflix’s subscriber numbers — which grew by nearly 26 million in 2020’s first half, to total 193 million worldwide, remains to be seen.

A MoveOn.org petition to remove “Cuties” from Netflix and charge the company with “distribution and exploiting minors” was showing 735,000 signatures as of the morning of Sept. 19.

Netflix shares — which have gained 47% year-to-date — closed  1.2% lower on Monday, Sept. 14, but then gained nearly 1.2% in the after-hours session, according to Benziga.

Speaking to the conspiracy element, some posters on #CancelNetflix are now actually accusing former President Barack Obama and wife Michelle Obama with encouraging Netflix to offer “Cuties” (for no clear reason), simply because they recently signed their own creative deal with Netflix.