Report: Domestic Traveler Confidence Grows, International Not So Much 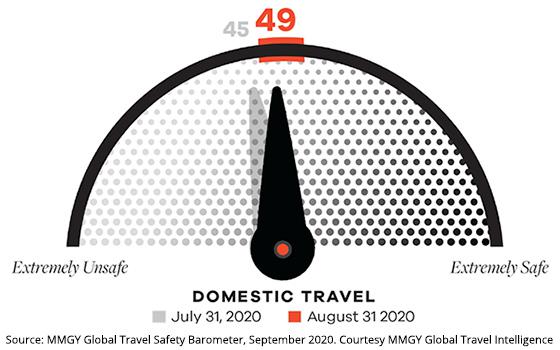 Americans are starting to feel safer traveling domestically, according to the latest results from MMGY Travel Intelligence’s ongoing survey tracking how COVID-19 is impacting travelers’ attitudes, perceptions, and behaviors.

The agency’s Domestic Travel Safety Barometer, which measures traveler sentiment on a scale of 0 (extremely unsafe) to 100 (extremely safe), reports a four-point jump in confidence in the safety of domestic travel, from a score of 45 to 49 from July to August. At the same time, the Lodging Safety Barometer reached an all-time high score of 50, as confidence in staying at hotels and resorts rose. International travel remains unsafe according to the study, with the scale moving only slightly from 30 to 32 in August.

“We’re seeing this momentum from the summer spurred on by people venturing away from home for the first time in months,” says Chris Davidson, executive vice president of insights and strategy, MMGY Global.

Travelers also continue to report feeling safer taking part in outdoor travel activities such as going to a park (61) or to the beach (54). Indoor activities, including attending an indoor concert or festival (27) or an indoor sporting event (29), remains perceived as riskier than outdoor activities.

Road warriors may also be pulling out their suitcases. After months of stagnation, the Business Travel Safety Barometer score showed a modest increase to 38, up from 35 points in July. Similarly, the most recent TIPS survey found the likelihood of taking a domestic business trip during the next six months increased, from 31% in July to 35% in August. Importantly, it also seems more people who thought business travel was going to be totally out of the picture this year now see it as a possibility. The percentage of business travelers who said they were not at all likely to take a business trip during the next six months declined significantly, from 35% to just 25%.

Cruises, however, are still extremely off-putting to respondents. The report recommends the cruise industry will need to “clearly and effectively communicate its specific actions and revised safety protocols to start to reassure travelers that it’s safe to re-enter the waters.”

MMGY Travel Intelligence’s Travel Intentions Pulse Survey is conducted monthly with 1,200 U.S. respondents who have taken an overnight trip for either business or leisure in the past 12 months. See more from the report here.