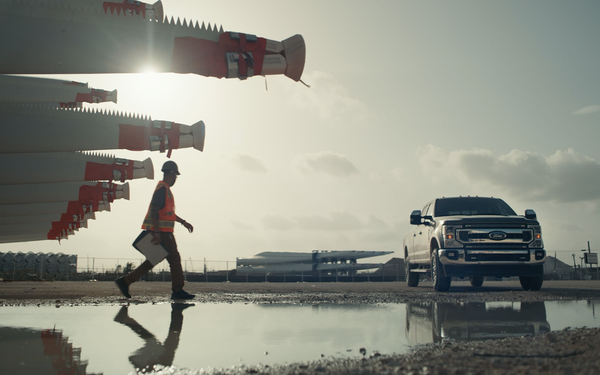 Ford Motor Co, is launching creative highlighting the automaker’s commitment to building in America and strengthening the country’s manufacturing base.

Ford is spotlighting its commitment to American jobs as the automaker that builds and sells more than 75% of its vehicles in the country, more than any other automaker, and employs the most hourly U.S. automotive workers, according to a study commissioned by Ford.

Ford launched the “Built For America” brand campaign from Wieden+Kennedy in May to help shift the message away from the pandemic, which had prompted such spots as “Built to Lend a Hand,” offering payment relief for existing customers.

“Our initial communications focused on assistance and reassurance,” said Matt VanDyke, director of Ford's U.S. marketing, in a release. “The next phase of communications is about recovery. Ford is America’s car company. We’re looking toward the future and staying committed to our customers -- what they want, what they need -- each step of the way.”

The 60-second spot includes voiceover from actor Bryan Cranston that concludes: “We are both at our best, this country and this company, when we build for every single American. We were built in America. That’s why we build for America.”

“We Built Them A Truck” which is 90 seconds, talks about how “Americans needed a vehicle worthy of what they can do. So we built them a truck.”

Ford trucks have helped -- and continued to help -- people build and better their lives, their communities, and their country, according to Wieden+Kennedy.

The 30-second “Dispatch” highlights how Ford’s Super Duty trucks, which are used as the basis of some ambulances and fire trucks, are up to the task. “These are the people we depend on. That’s why at the Ford Motor Company our Super Duties have undergone 20 million miles of testing -- so that these people can depend on us.”

“Icons,” also 30 seconds, highlights how the company is building vehicles for the future including electrifying the Mustang, making the F-150 a hybrid and reimagining the Bronco SUV.

“Made with Strength for Who and What Matter Most,” also 30 seconds, alludes to the pandemic with the voiceover “We get through any problems we face with the strength to outlast them. And while we can't say what comes next, we're doing what's needed. It's what we've done for over a century.”