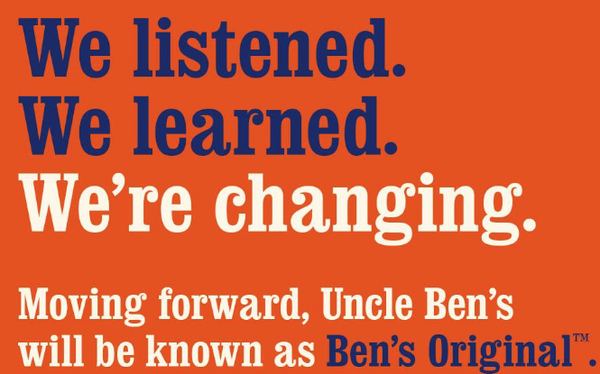 The iconic character Uncle Ben will disappear from the brand’s packaging along with a change in product name from Uncle Ben’s to Ben’s Original, Mars Food announced today.

But not right away.

In June, the company said that “now was the right time to evolve” the brand, as NBC News reported.

In a news release announcing how the change will be implemented, Mars said, “Over the last several weeks, we have listened to thousands of consumers, our own Associates and other stakeholders from around the world. We understand the inequities that were associated with the name and face of the previous brand, and as we announced in June, we have committed to change.”

The replacement Ben’s Original packaging—sans the image of a Black man in a bow tie—will begin reaching store shelves in 2021, according to the news release.

In the meantime, cue social media.

On Facebook, one of the first posts on the Uncle Ben’s U.S.A. page under the company’s announcement was by “the mom of a son who is of Uncle Ben’s race” who won the Ben’s Beginners contest in 2016. The competition encouraged families to submit a photo of them preparing a rice dish together in the hopes of winning a cash prize, as depicted in this video.

“He looked to that face and that man as inspiration to achieve a dream and be successful,” the post said of Uncle Ben. “The packaging was not demeaning but inspiring to him.”

Another commenter was a Black woman who is a Seventh Day Christian Church pastor: “We didn't ask you to remove uncle Ben's face. We asked to end police brutality. We asked for social justice. We asked for Breonna Taylor's murderers to be tried. No one cares whether its [sic] Uncle Ben or Ben's original.”

The pastor was hardly in a minority when it came to other responses to the company's announcement. Still, there was also plenty of sentiment supporting the brand change.

Then again, none of the commenters was  running an international company in today’s topsy-turvy landscape of real and perceived injustices and their correlation to fictional, brand characters.

It’s been a very long road for Uncle Ben, as detailed in a timeline on the brand’s website. The name first appeared on packaging in the mid-1940s. Along the way, the timeline details various product innovations—making no mention of the extreme racial strife that engulfed the United States in the 1960s and '70s.

It’s easy to forget that as recently as 2007, Mars had a different idea for how to portray Uncle Ben, as reported by Stuart Elliott (speaking of iconic) for The New York Times.

Even though Elliott described Uncle Ben as “a racially charged advertising character,” Mars had decided to give him a “Madison Avenue style” makeover by promoting him to…wait for it…chairman of the company.

At the time, Mars said there were no negative responses or references to the stereotyped aspects of the character. Rather, consumers “focused on positive images, quality, warmth, timelessness” and “the legend of Uncle Ben.”

In a similar vein, Quaker Oats said in June it would retire the Aunt Jemima name and character after more than a century of association with its pancake mixes and syrups. The decision was made shortly after a TikTok video describing the brand’s history was shared widely on social media.

On the retailer side, Trader Joe’s has thus far resisted calls to shed product names like Trader José and Trader Ming’s—perceived by some people as racist.

In its most recent statement on the issue, Trader Joe’s noted on July 24 that “inaccurate reports” had led some people to believe that a petition on Change.org had prompted the grocery chain to make such brand changes.

“We want to be clear: we disagree that any of these labels are racist. We do not make decisions based on petitions,” the company said.

“We make decisions based on what customers purchase, as well as the feedback we receive from our customers and Crew Members.”

This in a country populated by more than 209 million people ages 18+.