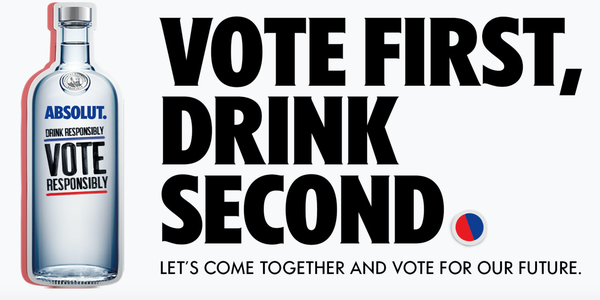 Pernod Ricard USA is giving all employees paid time off on Nov. 3 to vote. In an effort to ensure all voices from America’s spirits industry are heard at the polls, Chairman and CEO of Pernod Ricard North America, Ann Mukherjee, is calling for industry leaders and peers to do the same for their employees.

The company joins a host of others across categories activating campaigns around the election as well as supporting their employees in voting, including Impossible Foods, Footlocker, Verizon Media, OKCupid and Jones Soda.

In the past four decades, half of all eligible voters did not participate in the Presidential elections, said Pamela Forbus, chief marketing officer ofPernod Ricard USA, citing a Knight Foundation study.

“We’d never tell anyone who to vote for, but if we can inspire Americans to get out and vote -- and if they wish to, responsibly enjoy an Absolut cocktail after their ballot has been cast -- we will advance our goal of creating a better blended society,” Forbus says in a release.

The effort sends a series of direct messages to consumers about making voting a priority -- “Vote First, Drink Second,” “Your Vote Can Shake or Stir the Election,” “Save Your Drink for After the Vote,” and “Drinking Can Wait. Your Vote Can’t.”

As Election Day approaches, the brand will also execute several activations with consumer call-to-actions in key markets to further encourage all Americans to vote.

“Our deep commitment to that purpose is evident when we are willing to encourage Americans to prioritize voting above all things -- even our own product,” Clarke says in a release. Absolut plans to address more issues of “responsibility” in the future.