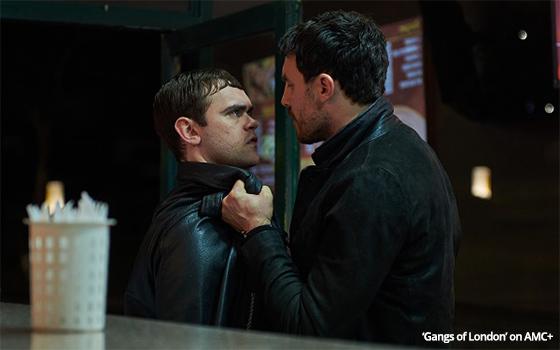 In TV shows and movies, as in news stories and opinion columns, the opening scene or sentence is everything.

If done well, the “lead” is the way you draw in viewers or readers, and hopefully, keep them there.

TV shows seeking to accomplish this attention-getting trick are turning more and more often to opening scenes that are designed to shock.

But what about when an opening scene goes too far?

That's what happens at the start of Episode One of “Gangs of London,” a drama series about the underworld in the British capital that premieres Thursday (October 1) on AMC+ (the ad-free subscription bundle of AMC, Shudder, Sundance Now and IFC Films Unlimited that is available on some cable systems).

This opening scene involves a man helplessly hanging upside down from the top of a tall skyscraper in London screaming and begging for his life.

He is being held there, suspended hundreds of feet above the pavement, by a single rope tied around one ankle.

He is evidently being punished for some grievous insult to the powers that be in London organized crime -- represented in this scene by a man who turns out to the young scion of the city's ruling crime clan.

But just having this man hang there and scream is not enough. Nor is it enough for the young crime boss to merely cut him loose -- which would have been heinous enough in its own right.

Instead, this apparently angry crime-family heir pours gasoline on the rope and the dangling man, then pauses dramatically while the man continues to scream.

Then, the young boss theatrically lights a match, ignites the rope and immolates his victim who continues to dangle there engulfed in flames until the rope burns sufficiently for this unfortunate burning man to plummet still screaming to the ground.

Suffice it to say, the scene was sickening to watch, and under normal circumstances, I would have turned the show completely off.

I only stuck around because I had set out to review this show, and I was determined to continue.

The strange thing was, the show turned out to be pretty good. It was good enough for me to stick around for the entire first episode and half of the second one before I realized it was high time I started writing.

All of which raised a question: Why did the creators of this show feel the need to present us with something so sickening as that opening scene?

They would probably answer that question with The Storytelling Defense, by which they would likely explain the scene as being necessary to define just how far this young crime boss will go to punish his enemies.

Yes, the point is made. But how many people will tune out of such a show from the very start before they find out that, as crime dramas go, “Gangs of London” has much to recommend it?

Its better aspects include great action scenes, a taut story and a fascinating collection of diverse underworld characters.

The show's sadistic opening scene turns out to have been completely unnecessary.