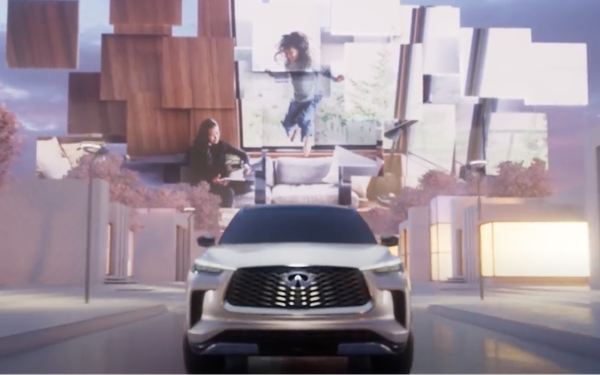 With auto shows and most other U.S. press events off the table for the time being due to the continuing pandemic, automakers are truly embracing digital reveals for their new models.

The upside of digital is the event can be visited and revisited not just by media, but also consumers. And in the case of the preproduced segments, automakers have way more control compared a live event where anything can happen. And if there’s any industry that loves control, it’s the auto industry.

Infiniti hosted a virtual reveal of the newest addition to its luxury SUV lineup. The QX60 Monograph was presented around the world digitally via an immersive, multimedia presentation that incorporated the SUV and Infiniti’s new global headquarters in Yokohama, Japan.

The virtual reveal was accompanied by an augmented reality experience that allowed participants to “place” a QX60 Monograph in their driveways. The AR experience is definitely geared not just to journalists, but the general public, according to the automaker.

The vehicle quickly made its auto show debut at the 2020 Beijing Motor Show, which opened Saturday with many disease controls in place. The show, postponed from March, is the first major trade show for any industry since the pandemic began.

The next U.S. auto show is scheduled for Chicago in February. The Los Angles show, normally held in November, was moved to next May. Thatmove prompted the Detroit show to push back its show from next June to September. The New York show is still scheduled for April.

Although geared mostly toward media, there’s nothing stopping curious consumers from visiting Kia Media and watching the event. It includes imagery that could have come straight out of a TV spot.

Digital reveals aren’t any harder or easier than in-person, he says.

“Both take the same amount of preparation and effort, so I would say they are equal without the travel being involved for digital reveals,” Wager tells DriveTime. “In-person reveals also allow us to collect quick feedback from the audience which can be helpful as we plan further communications."

Kia implemented some best practices based on what was learned from the in-person, live broadcast reveals conducted at auto shows pre-pandemic, he says.

“We’ve carried those lessons over to this new world of online reveals,” Wager says. “And even before the pandemic, we saw increases in the number of people that were interested in our new model debuts, so we saw -- and continue to see -- more sustained, ongoing engagement with consumers watching the content for weeks and even months after the actual live reveal date.”

Volkswagen of America also unveiled the all-new electric ID.4 SUV virtually at YouTube.com/VW with a 15-minute video that started out with some quick clips that included historic VW ads and images.

Scott Keogh, president and CEO of Volkswagen Group of America, led the reveal.

“I’m of course used to having a crowd and a few more cameras and certainly a lot more energy in front of me for these big moments, but I assure you there’s still an awful lot of energy in the air,” he said.

The video has already captured more than 175,000 views on YouTube alone. It’s hard to argue with that kind of exposure.