Concerts With Pod Seating Find The Beauty In Spacing Out 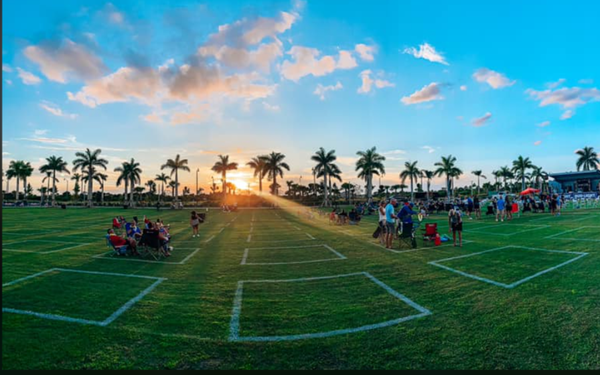 As the nation slowly (and maybe prematurely) moves toward getting back to what’s “normal,” outdoor concerts with seating pods are catching on. For the live music industry, which concert trade paper Pollstar once predicted would rake in $9 billion this year, any good idea sounds great.

Last weekend, Barry Nicholson, leader of the band Reverend Barry & the Funk, helped as workers, in unrelenting Florida heat, marked off eight foot-by-eight foot sections of the field outside the Sarasota Fairgrounds.

That night, hundreds of concert-goers who paid $60 per “square” had space for themselves, three guests and their lawn chairs to see the show, in a relatively safe environment, separated from other audience members who had bought their own pieces of the turf.

An elaborate pod-seating event is set for next month when the scenic concert venue, The Caverns, in Pelham, Tennessee, hosts a four-night engagement for Jason Isbell and The 400 Unit, with an audience of 650 each night. Their temperatures will be checked, and they’ll  be instructed to follow precise directions including when to arrive, how to leave, where to park, where to pee and what route to take to their designated area, all to keep them safe.

Instead of seeing the performance inside the cave, the normal (and still unusual) space, the concerts will be held in a field newly cleared for the event.

Audience members will be seated in two-person, four-person or  six-person roped-off pods. Each guest — paying a hefty $125 each — gets 10 square feet of his or her own.

Three of four concerts sold out the first day tickets went on sale. The Caverns is calling this its “Above Ground Concert Series.”

“We think it’s going to be great, and we’re taking all the precautions,” says Owner Todd May, who also owns an advertising and marketing company in Nashville. He had 75 name acts booked for 2020 before the venue had to close because of COVID-19  in March.

Then early in the summer, a friend sent him stories about plans for the first Gisburne Park Pop-up in Lancashire, England,  where festival organizers took the idea of social distancing pods and turned them into something elegant and posh.

Called “The UK’s First Socially Distanced Festival,” it was promoted as “1 venue, 11 weeks, 80+ events, 100+ artists and 30,000+ attendees.” It occurred July 11-August 30, and the crowds loved it. The Telegraph called it “The future of festivals.” It seemed marketed to the champagne class.

Nothing like that has happened in the U.S. There aren’t that many concert venues located on 1,000-acre 17th century estates, for one.

But the idea does seem to be taking hold, mostly in the South, maybe because bad weather won’t kill the concept while it’s just being born.

About 30 miles from he Sarasota Fairgrounds, the management of the Cool Today park is also using the pod idea. The spring training home of the Atlanta Braves, it marks off seating sections for concerts in a field with the kind of chalk that otherwise would be used to mark the batter’s box in the ballpark. (See photo above).

Last Friday, in Richmond, Virginia, folk/bluegrass/funk performer Keller Williams performed in a pod-seating concert at the training facility of the NFL’s Washington team.

Reverend Barry & the Funk’s Nicholson first experienced the pod concert at a concert in Largo, Florida and he’s gung-ho for more. He’s aiming for big success with his soulful funk band in a business that was tough even before the pandemic.

“For a regional band like ours, we see this as an opportunity,” Nicholson says, noting also that in a typical year, now's the time when visitors start heading down to Sarasota for the winter. “They could be afraid of the virus, and scared to death of [Florida] Gov. DeSantis. They may not be able to do much. These concerts could do really well for musicians around here. I wish we could get some sponsors to step up.”

He adds, “It’s great to play for an audience again.”