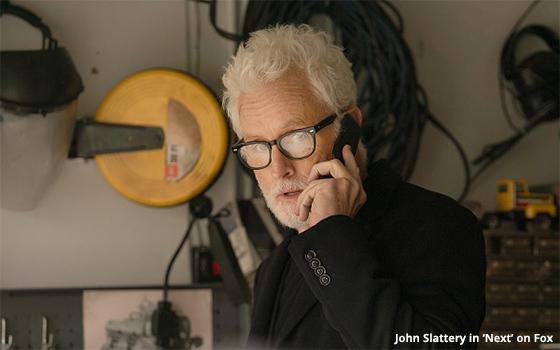 A new drama series premiering this week about a troubled tech genius and the out-of-control artificial-intelligence software that he designed can take its place among the best of these kinds of modern-day TV shows.

The show is called “Next,” and it might be the next big thing in the growing list of series that have been serving for several years now as a collective warning that humankind is on the verge of creating forms of artificial intelligence that will outpace our own -- and our ability to govern them.

In “Next,” the genius is a billionaire Silicon Valley innovator named Paul LeBlanc, played by John Slattery (pictured above).

The character is a composite of our real-life tech whizzes who make headlines with their bold statements and gargantuan personal investments in technologies of the future that they intend to bring to us today.

Fittingly, the first episode of “Next” starts with an onscreen quotation attributed to Elon Musk: “With artificial intelligence, we are summoning the demon.”

Without giving too much away, it is evident from the premiere episode of “Next” that the artificial intelligence this fictional tech genius has unleashed has the potential to become demonic indeed.

One of the most attractive characteristics of the “Next” premiere is the way it weaves the expository material that is so essential to any series' first episode into the fabric of the episode's story line.

In the show, the story behind this AI software, the company that made it and the man who created the software and the company is revealed organically through the actions and statements of the show's characters.

No one makes any hurried, stilted speeches in which everything is explained in a page of dialogue, as in so many other shows.

In the absence of any expository roadblocks, Episode One of “Next” (which the TV Blog watched on Friday) is a fast-paced, unsettling, hair-raising thrill ride.

Much of the show's attractiveness can be credited directly to John Slattery, who is best-known for playing everyone's favorite narcissistic ad agency head, Roger Sterling on “Mad Men.”

In “Next,” he gets his next big role, playing a man who is a walking bundle of contradictions. LeBlanc is obnoxious, unfiltered, rich and powerful. But he apparently retains just enough of his idealism that he is eager to derail the very technology that he spawned.

For this effort, he joins forces with a plucky FBI agent (played by Fernanda Andrade) whose own family soon becomes threatened by this AI's takeover of the virtual assistant that sits on their kitchen island like a member of the family.

Whether or not artificial intelligence can really evolve to the point where it can outsmart all the rest of us, this frightening TV show makes this possibility seem very, very real.