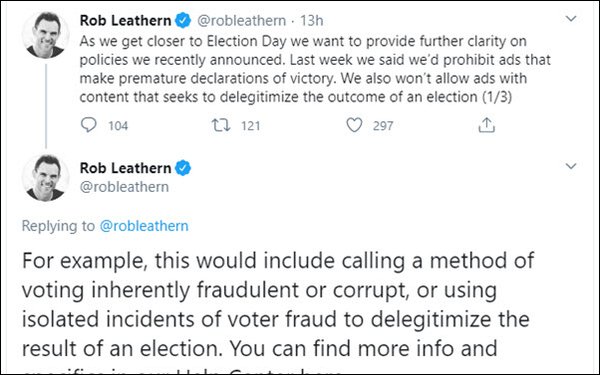 Facebook Inc. on Wednesday took two more steps to try to exert some control over political advertising in the lead-up to the election.

Following President Trump’s latest false claims about compromised election integrity and refusal to agree to accept the outcome, during Tuesday night’s debate with Democratic presidential nominee Joe Biden, Facebook announced that it will now outright prohibit ads “with content that seeks to delegitimize the outcome of an election.”

Examples include calling a method of voting inherently fraudulent or corrupt, or using isolated incidents of voter fraud to delegitimize the result of an election, he said, referring advertisers to more information at Facebook’s help center, which now shows a growing list of reasons Facebook will reject ads related to the U.S. census, as well as to the election.

Last month, when it announced that it would stop taking all political ads during the week leading up to the election, Facebook also added more political ad limitations, including stating that it would attach an “informational label” to content that seeks to delegitimize election outcomes or discuss the legitimacy of voting methods.

Also yesterday, Facebook removed ads from Trump’s campaign claiming without evidence that allowing refugees from abroad into the United States will increase the country’s COVID risks.

“We rejected these ads because we don’t allow claims that people’s physical safety, health, or survival is threatened by people on the basis of their national origin or immigration status,” Facebook spokesperson Andy Stone said in a statement, referring to the company’s existing advertising policies.

There were at least 38 different versions of the ads, which began running Tuesday, reports NBC News. Some of he ads falsely claimed that Biden would increase the number of refugees arriving from Syria, Somalia and Yemen by 700%.