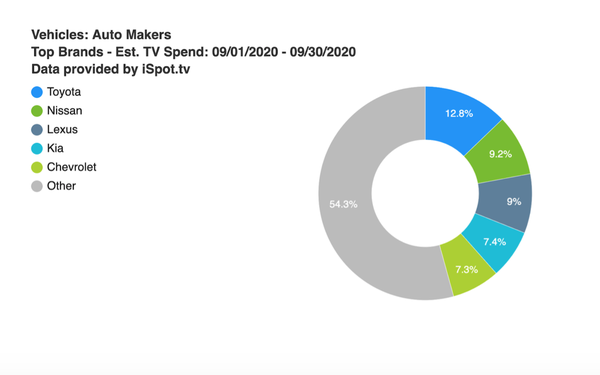 Automakers spent more on TV ads in September compared to August, but totals are still down compared to a year ago, according to iSpot.tv.

The most notable difference in where impressions came from this year compared to 2019 was that the NBA and NHL seasons, delayed for months due to COVID-19, came back to TV over the summer and continued to generate impressions for automakers this month.

NFL football games still reigned supreme with impressions (2.3 billion in September, a 29.94% decrease from the automakers’ NFL impression-count in Sept. 2019), but NBA games were in second place with 1.2 billion , NHL hockey was in fifth place (242.7 million). Last year, college football games took No. 2 in September with over 2 billion impressions,  per iSpot.tv.

As for the actual ads, the top spots by impressions had a variety of themes. Notably, the No. 1 spot by impressions was a family-focused ad from Chevrolet featuring some of the brand’s engineers talking about why Chevy offers so many safety features on their vehicles.

Cadillac, GMC, Volkswagen, Lincoln Motor Company and Mercedes-Benz had the biggest declines among the top 20 brands, all decreasing spending by 22% to 73%, according to iSpot.tv.

With the return of NFL and college football in September, plus the continuation of the NBA, MLB and NHL seasons, sports were a huge driver of impressions for automakers, said Stu Schwartzapfel, senior vice president, media partnerships at iSpot.tv.

“Although the NHL season has wrapped up and the NBA Finals are ending, auto brands will still be able to reach sports-loving audiences through this fall,” Schwartzapfel tells Marketing Daily. “And given the slow start to the fall TV season due to COVID-related delays, sports will continue to be an important part of the marketing mix when it comes to capturing live viewer attention.”