For Chimps On TV, Evolution Is Ongoing 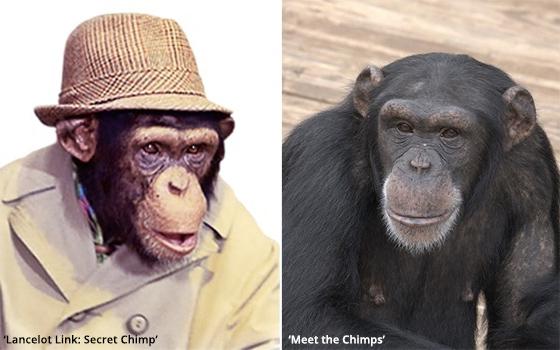 Disney+ has a winner with “Meet the Chimps,” a reality show about chimpanzees living out their lives at a sprawling chimp sanctuary in Louisiana.

The place is called Chimp Haven, a non-profit facility dedicated to rescuing chimps whose former lives as pets or lab animals have left them unable to care for themselves if released into the wild.

Established in 1995 with just two chimps, Chimp Haven’s 200-acre property is now home to 300 chimpanzees of every age who are sectioned off and separated into groups, in conformity with the tendency of these animals to form close-knit communities.

Apparently, chimps are nothing if not territorial and clannish. They are also eminently watchable as they go about their lives -- which makes this six-episode reality series a no-brainer. It starts streaming on Disney+ on Friday.

Narrated by Jane Lynch, “Meet the Chimps” introduces us to a number of these chummy chimps and defines their relationships with easy-to-understand family trees shown onscreen.

Naturally, the chimps all have human-sounding names such as Mackenzie, Mason, Henry, Riley and Donovan. One male chimp is named Jimmy Dean, although he bears no resemblance to ’50s movie star James Dean or breakfast sausage maven Jimmy Dean.

One prominent female is named Sara Soda, while a male is named Whiskey. However, there is no sign in the series’ premiere that these two will eventually form a whiskey-and-soda love match.

While the show’s producers and its narrator try their best to present their chimpanzee clans in human terms, the dignity of these animals is never disrespected by clothing them in funny costumes or placing them in human situations.

That was once de rigeuer for chimps in movies and TV shows, with the best and most notorious example being the late-’60s series with an all-chimp cast, “Lancelot Link: Secret Chimp.”

In that show, a group of swashbuckling chimp secret agents battled the forces of evil in stylish costumes and sports cars.

Crude special effects gave these apes the power of human speech. Basically, while they chewed, their voices were supplied by human actors.

While this undoubtedly makes “Lancelot Link” sound like a great show (which it was), society today tends to frown on this kind of exploitation of animals for the sake of entertainment.

By contrast, on “Meet the Chimps,” no chimp is made to wear a belted trench coat or sunglasses. Nor do they appear to be harmed in any way, physically or emotionally.

“Meet the Chimps” comes to Disney+ via Disney-owned National Geographic, which oversaw its production.

The new Disney+ miniseries adaptation of “The Right Stuff,” reviewed here last week, also came from NatGeo. And like “Meet the Chimps,” “The Right Stuff” bypassed NatGeo and went straight to Disney+.

Both shows are apparently part of Disney’s new corporate-wide effort -- officially announced this week and widely reported in the trade press and business media -- to funnel as much product as possible from the many Disney companies directly to the company’s direct-to-consumer streaming service.

“Meet the Chimps” starts streaming on Friday (October 16) on Disney+.