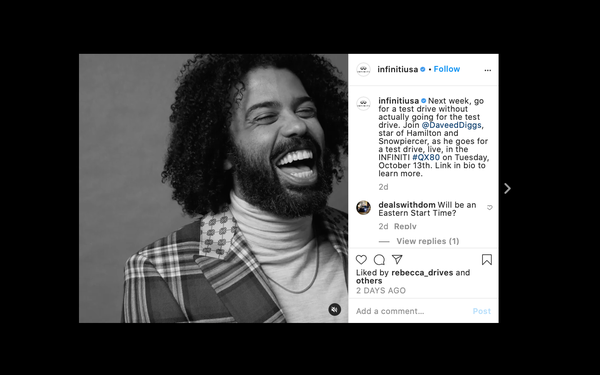 Infiniti has hired actor Daveed Diggs to take the Infiniti QX80 for a spin on Instagram Live on Oct. 13.

Diggs will interact live with viewers on the streaming social media platform. He will answer questions about anything from projects that he is working on, to the QX80 test drive experience, to life in general.

The automaker created an event page for the activation, which will take place on Infiniti’s Instagram page.

This is a way for viewers to have a “driver’s-seat view” from the safety and comfort of their own homes, according to Infiniti.

Well-known for his Tony and Grammy Award-winning roles in “Hamilton” (Broadway), Diggs currently stars in TNT’s “Snowpiercer," Apple’s “Central Park,” Showtime’s “The Good Lord Bird” and will next be seen in Pixar’s “Soul.” His rap group, Clipping, will release their latest LP on Oct. 23.

Diggs has a “multifaceted, yet relatable personality” that is a good fit for the brand, says Jeff Pope, Infiniti Americas group vice president. The goal is to “connect with more consumers than ever” before the automaker’s Winter Sales Event begins.

The automaker is also using the activation to expose consumers to its digital showroom, Infiniti Now, which allows them to schedule test drives online and have test drive vehicles delivered by participating retailers.