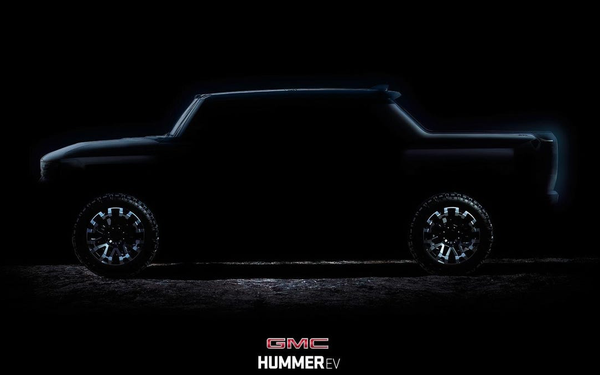 GMC will launch the Hummer EV next week through a fully virtual reveal unlike any other, according to the automaker.

Starting at 8 p.m. on Oct. 20, the full production vehicle will be revealed in a feature film through multiple streaming platforms, social media channels and three nights of custom placements in high-profile broadcast programs. The vehicle will be shown live for the first time during the GMC Kickoff Show on "Thursday Night Football" on Oct. 22.

The division estimates the campaign could reach up to 80% of U.S. adults over age 18, says Phil Brook, vice president of marketing for GMC and Buick.

“In terms of the number of channels and platforms, and the breadth of the customers we’re targeting, I don’t believe we’ve done anything like this in GMC’s history,” Brook tells Marketing Daily.

It will be the first U.S.-based vehicle reveal livestreamed on Twitch, a live entertainment streaming service. Viewers can watch the feature film on GMC’s Twitch channel or by following one of five top Twitch streamers, who will co-stream and share commentary throughout the reveal. Through Twitch’s interactive chat feature, viewers can join in on the conversation, and use the Hummer EV emote (a custom Twitch-specific emoticon).

In addition to Twitch, viewers can watch the reveal by tuning into NBC’s “The Voice” or the MLB World Series Game 1, where the show host will introduce the film, which runs two minutes and 15 seconds.

It will also stream from Hulu, Roku, Fire TV as well as GMC’s YouTube and Twitter channels and GMC.com.

GMC is again working with Lebron James along with a handful of other high-profile social media influencers in fashion, design, and off-roading to share the reveal and create a cultural moment on social media, Brook says.

“We knew we had to reveal the Hummer EV in a way that matched the level of innovation showcased by the vehicle itself,” Brook says. “We’re looking to change the general perception of Hummer and help consumers reimagine what an electric truck can be. That’s why we sought out nontraditional reveal platforms like Twitch.”

Prior to the pandemic’s disruption in second quarter, a different kind of reveal was originally planned for May 2020.

“We immediately saw this as an opportunity to do something we’ve never done with a vehicle reveal,” Brook says. “Rather than bringing people to the reveal, we’re bringing the reveal to them, and doing so at massive scale fit for such an important vehicle."

One other thing that has changed post-pandemic is the way the automaker entices consumers to reserve a vehicle, he says.

“There was always a plan to have a reservation option at the time of reveal, but the change in plans gave us the chance to really hone in on our reservation strategy and make it an enjoyable experience for interested customers,” Brook says. “The reveal will use QR codes on Hulu to make reservations simple — while the ad is running, you can point your phone at the QR code, and it will take you straight to the reservation part of the website.”

Pivoting the strategy to be 100% virtual allows the brand to reach consumers in a completely new way.

“We want to set the Hummer EV up as an iconic nameplate, and to do that, you need broad appeal plus mass excitement,” Brook says. "Our reveal strategy accomplishes both."