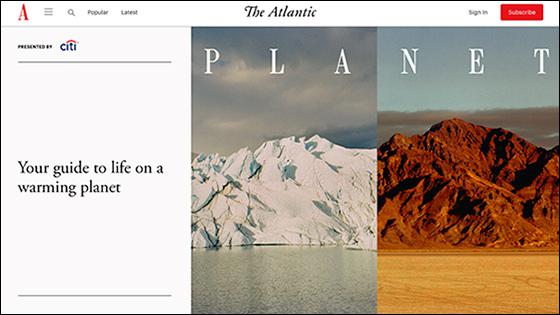 has launched a new section dedicated to covering climate change, called Planet.The section launched today with “The Heat Gap” by senior editor Vann R. Newkirk II, who reports that heat is the human-rights issue of the next decade.

“Living through a pandemic has primed people to think differently about climate change,” stated Adrienne LaFrance, The Atlantic’s executive editor. “This isn’t just a science story, and it’s not just a politics story. It’s an everything story.”

In an introduction to the section, Meyer wrote: “We recognize — as you might too — that climate change is the backdrop of our lives and one of the moral crises of the century, a globe-spanning force reshaping how we work, how we play, how we shop, and how we vote.” Planet “will cover climate change in the present tense — not as a distant threat, but as a force that is already reconfiguring business, culture, society, and life on Earth.”

Meyer will also write a newsletter called The Weekly Planet. The first installment will be published on October 20.

“It will be a user’s guide to living through climate change,” according to The Atlantic, with tools and tips on making daily decisions about what to consume, what to care about, and how it affects the climate.

In August,The Atlantic announced it was expanding its Culture section by bringing together three verticals under its umbrella.

It provides a collection of essays, analysis and opinions from MSNBC hosts and contributors, available on MSNBC.com, in the middle of the homepage, and in the "MSNBC Daily" newsletter. Opening day stories include Ali Velshi discussing how Donald Trump emboldens right-wing militias and legal analyst Barbara McQuade on how Senate Democratss hope to use Ruth Bader Ginsburg and the death penalty to challenge Amy Coney Barrett's qualifications for the highest court.

The opinion editor for MSNBC Digital is Clarissa Pharr, who previously worked at Quartz.

Editor and reporter Hayes Brown will frame the day’s news each morning for the section.