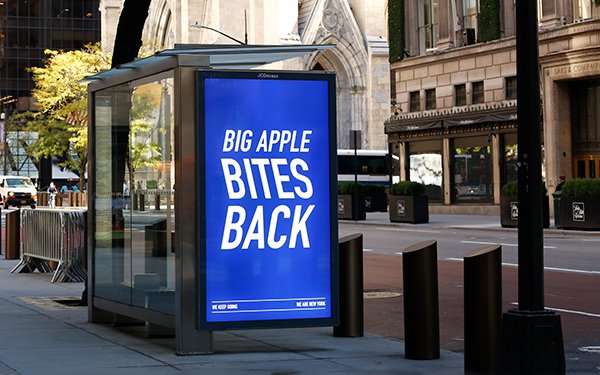 Fred & Farid (F&F) is spreading joy across America via a partnership with JCDecaux to allow the free use of inventory totaling 500 OOH billboards.

More than 150 slogans advocating positivity, happiness and optimism under the “We Keep Going” umbrella will appear in New York, Los Angeles, Chicago, and Boston.

Each batch of messaging was tailored to the specific city. For Los Angeles, the 60 posters in both English and Spanish are inspired by the vibrant colors of the city, taking on a classic printing style that has been used on the streets of LA for decades. Chicago’s messages use the same typeface, Avant Garde Gothic, that is used across much of the city, including the Chicago Skyway Toll Bridge.

Native Bostonians within the agency drafted “wicked” one-liners tying into the rich sports culture of the city, utilizing Boston’s beloved “lucky” green and sporty typography. And New York incorporated the city’s towering steel skyscrapers, the brick color on the walls, the iconic yellow of the taxis, and the zig-zag shape of fire escapes on traditional buildings.

There really is no overarching goal beyond spreading hope and happiness.  “No big emotional statement,” stated Fred & Farid. “No hashtag or call-to-action. Just a fact: We keep going. Because that’s all we can do.”

This project was sparked by F&F hometown pride for Los Angeles, the location for the agency’s headquarters. With COVID-19 taking a toll on cities, it is more important now than ever to come together, show support for our hometowns and remind ourselves that we will keep going and get through this difficult year, explains an agency spokesperson.

This passion project was driven by the entire agency and something the team has been wanting to put together for a long time.  Agency founders Fred & Farid then personally reached out to Jean-Luc Decaux to enlist his company who willingly offered up billboards in these four markets.