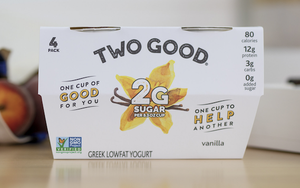 Danone’s Two Good yogurt is doubling down on the brand’s alignment with the issue of food waste—which it considers “the world’s dumbest problem.”

It’s an issue that’s become even more acute given the ongoing pandemic.

“One in five mothers are saying their children not getting enough to eat. We have to do something as a marketing community, as humans, as people,”
said Manos Spanos, senior vice president /CMO of brand marketing, yogurt BU at Danone North America, said at last week’s Association of National Advertisers' Masters of Marketing conference.

In his presentation about the fast-growing Two Good brand, Spanos revealed that Target stores will soon stock cups of the product bearing the words Two Good, Good Save.

It’s a reference to the brand’s partnership with Full Harvest, an organization that helps to reduce food waste by sourcing “surplus and ugly produce” for food manufacturers.

As part of its ingredients, Two Good will use Meyer lemons from California farms “that would otherwise end up in some sort of a landfill.”

Early in his presentation, Spanos explained how Two Good—launched in January of 2019 and with retail sales of more than $100 million in the last 16 months—initially focused on providing low sugar content without sacrificing taste.

With a wellness positioning and 60% of launch media spent on digital channels, Two Good quickly became the fastest-growing brand in the yogurt category, according to Spanos.

Then the question became “What next?”

The answer was for the brand to take a stance on food waste. During Earth Week in April, Two Good donated $100,000 from profits made at select partner retailers to the City Harvest and We Don’t Waste organizations.

“The response was phenomenal,” said Spanos. “The sales went off the roof. I think we stumbled upon this whole notion of fighting food waste that was huge.”

Spanos then predicted that Danone will “radically transform” the Two Good brand with a broader food-waste reduction initiative.

“It’s going to explode it and take it to the next level,” he said in reference to a partnership announced in August with City Harvest and We Don’t Waste.

“Food waste is the world’s dumbest problem. And I cannot say that strongly enough,” given that one in six Americans are facing food insecurity, he added.

Two Good packaging will incorporate the wording “One cup of good for you. One cup to help another.”

When the program was announced, Danone said that by working with City Harvest and We Don’t Waste, “Two Good will help rescue and provide an equal amount of food to people in need for every purchase of Two Good yogurt by consumers.”

While neither the company’s announcement nor Spanos explained the logistics of the initiative, he said that based on Two Goods sales today, it will “impact 28 million meals over the next year.”