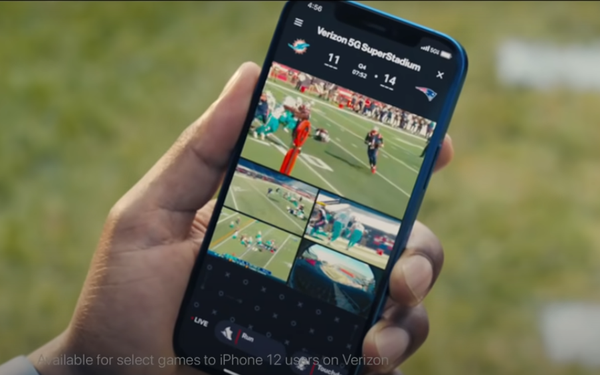 A handful of NFL fans are getting a chance to see Verizon’s enhanced 5G service in tandem with the new iPhone 12 phone. But the company is playing it up big.

Games where the experience will be featured are Sunday’s match-up between the Los Angeles Chargers and Miami Dolphins, and the Monday game matching the New York Giants and the Tampa Bay Buccaneers. Only viewers beamed the Chargers-Dophins game in their area will see the Super Stadium experience. Viewers nationwide can see the Giants-Buccaneers game.

But like a quarterback threading the needle to complete a pass, there’s only a small window of opportunity for people to catch Verizon’s 5G show. They’d have to have the new 5G iPhone 12 and Verizon 5G Ultra Wideband service, and watch it over the NFL Network app.

That is an extremely small universe of viewers, though Verizon recently expanded Ultra  service to 19 additional US cities, 19 stadiums and six airports. The trouble is, Ultra operates on an mmWave band, which is very fast. It just doesn’t extend very far--blocks, not miles.

Verizon has also just improved its more expandable standard 5G service. Officially, this week it is widening 5G availability so the nifty new NFL features could, in theory, be viewable by a larger pool. Verizon says the new 5G service closer to Ultra could reach 200 million people, according to its new coverage map.

In a promotional video, NFL Commissioner Roger Goodell says, “Today we don’t have as many fans in our stadiums as we want,” referring to the COVID-19 limit on attendance. “But we’re able to deliver an experience [as if it was] in the stadium. The 5G platform is going to do it with lower latency and higher speeds. We’re going to be able to make that experience like you’re sitting on the 50-yard line.”

The video exclaims, “Feel the action on the field with Verizon 5G Super Stadium.”

Though Verizon 5G Ultra has not been not widely available, it has been widely promoted. Chris Rock appears in new Verizon spots, proclaiming, “5G just got real” and touting those simultaneous multi-angle shots in NFL games--and the incredible speed of 5G Ultra.

“Remember when the song of the summer’ took a whole summer to download?” he asks.  “One time I waited 51 minutes for Janelle Monáe’s ‘Dirty Computer’ to download. That’s longer than the whole album!”