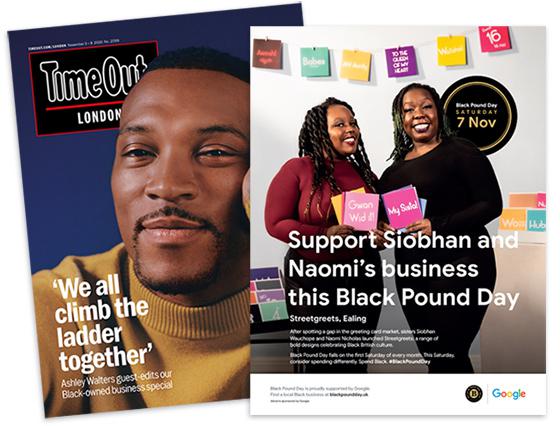 A month ago, Time Out launched its "Love Local" campaign to support the small food, drink, arts-and-culture businesses in 16 campaigns worldwide, including New York, Madrid, Los Angeles and Sydney.

The goal is to give businesses a platform to reach new customers, to prevent closings all to common in the pandemic. Throughout 2020 and beyond, the 52-year-old magazine will continue that effort.

It now has an added twist.

Black Pound Day takes place on the first Saturday of every month.

OMD and Essence, Google’s media agencies coordinated the integrated campaign with Time Out London, which utilizes print, digital and social.

To augment the effort, a special Time Out London magazine edition, available now, is devoted to Black businesses, restaurants and contributors, such as photographers, writers and illustrators. The founder of Dope Black Dads, author Candice Carty Williams, Black Girls Camping Trip are among those featured.

There will also be Instagram Stories highlighting businesses on Black Pound Day.

Google is the sole advertiser for the issue, donating 80% of the ad space to Black-owned businesses to showcase their goods and services.

The special issue is curated by guest editor Ashley Walters, also known as Asher D, an English rapper, songwriter and actor, and the magazine’s staff.

And despite the new shutdown ordered for England by Prime Minister Boris Johnson, to begin Nov. 5 through Dec. 2, the partnership continues. Johnson's order came as the UK passed 1 million confirmed COVID-19 cases. Under the new rules, Britain’s bars and restaurants are take-out only, nonessential shops must close, though schools, construction sites and manufacturers remain open.)

"Time Out is all about celebrating inclusion and diversity, and this partnership with Google showcases how brand collaboration is crucial to shedding light on marginalized or minority causes and voices,” says Wayne Mensah, Time Out London’s director of creative solutions.