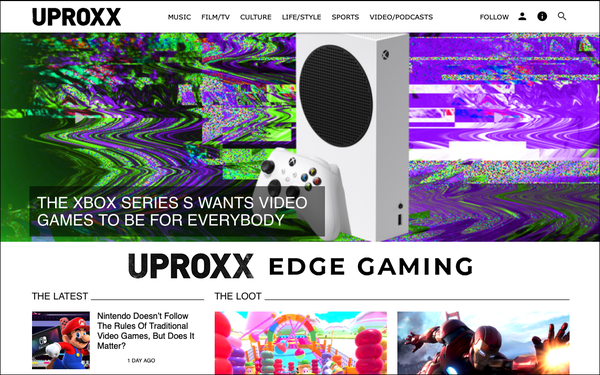 Edge, an acronym for ”Experiential Development for Gaming and Esports,” will feature gaming and esports content, share gaming-themed video streams and promote events in partnership with VY Esports, an LA-based gaming-esports company.

Uproxx and VY Esports started working together earlier this year and launched a virtual event called “Edge” in July.

Uproxx will oversee editorial content, while VY Esports will manage event executions and activations, such as an immersive digital gaming festival that will debut by year's end.

Uproxx has grown its gaming content throughout 2020, with activations and gaming sessions on live streaming platform Twitch and reviews, interviews and features with talent such as Michael B. Jordan, T. Pain, Aerial Powers and JR Smith.

“Launching Edge not only widens the scope of Uproxx’s current vertical coverage and provides exciting business opportunities, but it allows us to enhance the current cultural conversation and speak to our belief that gaming is for everyone,” stated Martin Rickman, editorial director of Uproxx Sports and Gaming.

Content will include commissioned pieces exploring the blurred line between films and video games, the positive effects of gaming on mental health, and gamer style.

Uproxx Edge will also publish articles on the cultural impact of the release of the PS5 and Xbox Series X, as well as discuss the gaming interests of athletes.

American Eagle is the presenting sponsor of the Uproxx Edge launch. The retail brand will be featured in a native editorial series around gaming and casual style, and own ads around the new vertical’s editorial.