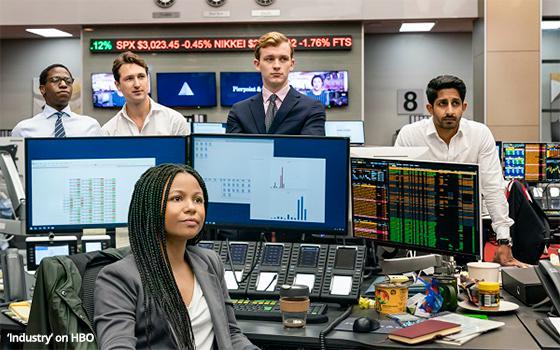 TV is chock full of future-focused series and assorted costume dramas that re-create past decades.

But here comes a scripted drama that depicts a part of our modern, contemporary world with what feels like pinpoint accuracy, despite the fact that it contains no references to the subjects that occupy all of our hearts and minds at the moment -- COVID-19, civil unrest and partisan politics.

The show is called “Industry,” and it premieres Monday on HBO. It is an eight-part series about a group of recent business-school graduates all vying for permanent jobs with a global investment bank based in London, the fictional Pierpoint & Co.

They are bright-eyed and bushy-tailed, and also ambitious, rivalrous, cunning and by various degrees, ruthless.

While watching the premiere episode last Friday, I wrote in my notes: “TV has finally caught up with the 21st century.”

The show just seemed so thoroughly modern. This group of diverse young people -- some of whom are pictured above -- are being trained, evaluated, hazed and harassed on the trading floor of this international investment firm. And it all seems so real.

This show possesses one of the ingredients that so many shows of this type seem to lack -- namely, high stakes.

Success in this investment bank's training program might not seem so important to those of us who pursued other careers and never experienced the thrill of the trading floor.

But the makers of “Industry” and their cast of characters somehow make it seem as important as life or death.

The first episode that the TV Blog previewed was a relentless, emotional roller-coaster ride -- so much so that this show might be too intense for some.

Moreover, the show has too many graphic sex scenes and nude scenes. It is as if HBO simply cannot resist putting on TV shows without at least some of this decidedly adult material. For better or worse (and usually the latter), it is in HBO's DNA.

Whenever I see this on a TV show, I sometimes feel badly for the actors and actresses who are being commanded to take part in these scenes and give them their all.

At such times I ask myself: Why do so many TV producers and directors insist on humiliating their co-workers -- in this case, actors -- by requiring them to demean themselves on camera?

I suppose the film and TV industries are among the last bastions of the business world where this kind of behavior in the workplace has not yet been stamped out. Perhaps it eventually will be.