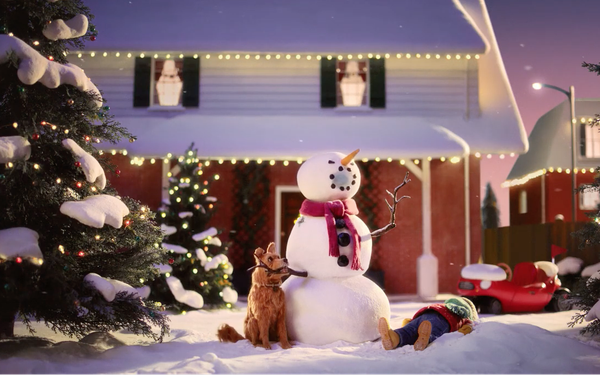 Mars Petcare is taking a darkly humorous approach in its holiday spot for Greenies dog chews.

The 20-second spot from Adam&EveDDB shows a seemingly innocent scene where a child is building a snowman accompanied by his four-legged best friend.

“Dogs don’t know what’s good for them,” per the voiceover. “Like not being able to leave a good stick alone.”  The dog jumps up and grabs the snowman’s stick arm, prompting the snowman to scream in pain and the boy to pass out in the snow. “Greenies Dental treat, something better for your dog to chew on,” concludes the voiceover.

The spot is the latest piece in the brand’s current creative campaign, which focuses on how dogs don’t know what’s good for them.  The campaign launched in May 2019 to support the brand’s expansion into mass retailers, according to the company.

“As pet parents, we want the best for our pups, but their wide-eyed innocence and impulsiveness can make it difficult to steer them in the right direction,” said Olivia Gardner, Greenies brand manager, in a release.

The ad is being supported with online video platforms, digital, social and print through the end of the year. It will also start airing on TV on Nov. 23.