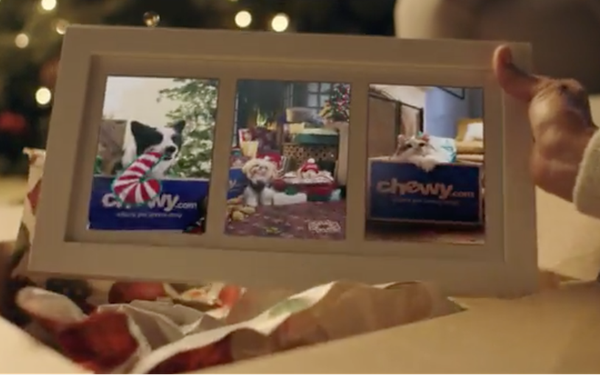 Like everything that has preceded it this year, the 2020 holiday season is shaping up to be like nothing consumers have experienced in their lives.

The premise is, if we can’t all be together this holiday season, then at least our pets can inspire new ways for loved ones to maintain special connections and participate in new, shared activities.

Chewy’s holiday creative is an extension of its brand campaign, #PetsBringUsTogether, which debuted at the onset of the pandemic.

The holiday effort includes a 30-second and 15-second TV spot launching Nov. 5, followed by a second 30-second spot in December. It was developed in partnership with creative agency SpecialGuest and directed by Tucker Bliss at 1stAveMachine.

The media plan includes launching on linear TV, CTV and digital radio (Spotify), then rolling out with “unboxing”/gift opening videos across display and paid social, as well as OOH billboards in Times Square and Silicon Valley.

The first spot, “Holiday Traditions: All the Moments,” shows a mom sending care packages not to her millennial kids, but to their pets. A Zoom call at the end shows the pets enjoying the loot while the humans connect.

Millennials represent the largest pet-owning demographic, and pets are often seen as a “starter child” for millennials who are having families later in life, according to Chewy.

The campaign also calls attention to multiple themes, including the increased humanization of pets. Because pets are such valued members of the family, pet parents have been willing to pay more to give them the best care, food and special gifts, especially around the holidays, according to the company.

The spots also show the phenomenon of customers taking images of their pets in Chewy boxes, while also transforming the boxes into decorative items, such as box castles.