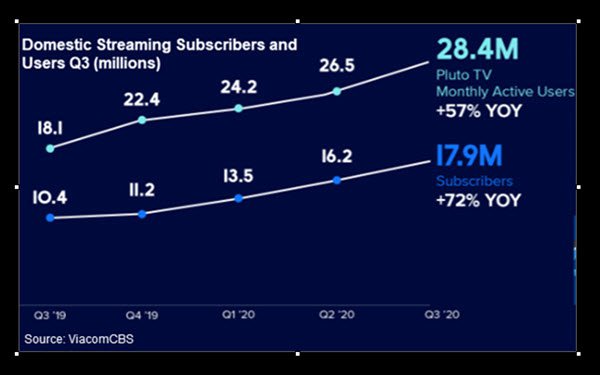 ViacomCBS’s domestic streaming and digital video revenue rose 56% in the third quarter to $636 million, up from $407 million in third-quarter 2019, the company reported this morning.

The growth was driven by a 78% increase in subscription streaming revenue and a double-digit gain in digital video advertising revenue, ViacomCBS said.

Domestic streaming paid subscribers reached 17.9M, up 72% year-over-year, with CBS All Access and Showtime OTT seeing “significant growth” in sign-ups year-over-year and in comparison with Q2 2020, according to the company.

The AVOD, which recently launched in Spain and is set to expand to Brazil, France and Italy, now has 7.5 million users outside the U.S., bringing its total domestic and international users to 35.9 million.

Pluto TV’s advertising revenue more than doubled versus the year-ago quarter, according to ViacomCBS, although it did not provide the dollar amounts.

With Tom Ryan now in place as president and CEO of a newly formed global streaming organization that integrates oversight and content sharing for the paid and free streaming services, the company confirmed it’s on track for an early 2021 relaunch of CBS All Access as the expanded Paramount+ offering.

ViacomCBS’s total ad revenues were down 6%, to $2.19 billion, for the quarter.

That was a significant improvement from a 27% drop in ad revenue during Q2, the period hardest-hit by pandemic advertising cutbacks, and from Q1’s 19% decline, which included some early-in-the-crisis ad cutbacks in March.

Content licensing revenue dropped 33% YoY, reflecting a lower volume of licensing compared to the prior-year quarter, driven by the timing of program availabilities and the adverse impacts of COVID.

Theatrical revenue was “immaterial” in the quarter due to the closure or reduction in capacity of movie theaters in response to the pandemic.

Publishing revenue rose 29%, driven by strong print and digital sales of political titles from Simon & Schuster, including Mary Trump’s “Too Much and Never Enough: How My Family Created the World’s Most Dangerous Man,” and Bob Woodward’s “Rage.”