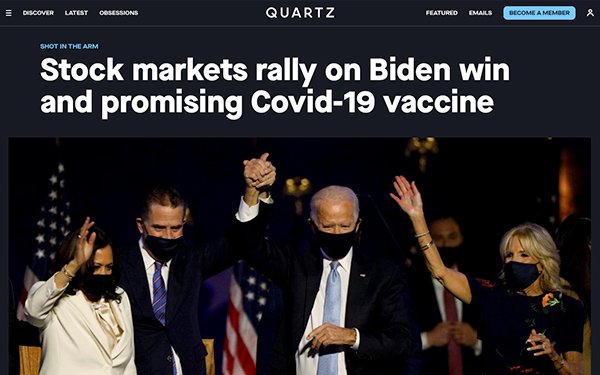 Editor-in-chief Katherine Bell will become a minority owner; the two will take Quartz private. The rest of Quartz’s staff will share equity in the new company.

Uzabase bought Quartz from Atlantic Media two years ago for $86 million. It launched a subscription business shortly after.

The acquisition by Seward is effective immediately. Terms of the deal were not disclosed.

“This is an exciting moment for our own business, as we become an independent media company again,” Seward stated.

Having Uzabase as an owner “was helpful as we navigated a period of enormous change in digital media, but we are better off right now as a start-up, freer to chart our own path,” Seward wrote in a note to readers published yesterday.

Bell added: “In a time of great change and risk, we need ambitious and innovative business journalism more than ever.”

Seward has been CEO since October 2019, after serving as Chief Product Officer and executive editor.

Bell joined Quartz in 2019. She previously served as editor-in-chief of Barron’s magazine.

Yusuke Umeda, CEO of Uzabase, will personally provide debt financing for the new Quartz company, which will also seek outside investment, according to a statement.

Uzabase determined Quartz “is better positioned as an independent company,” Umeda stated. He continues to “believe so strongly in the value of Quartz and in the leadership of both Zach and Katherine, that I am happy to continue my support.”

Quartz surpassed 21,000 subscribers this past summer, nearly doubling its subscriber base in less than a year.

Uzabase estimated it would see $1.9 million in subscription revenue this year from Quartz.

However, a steep drop in ad revenue hurt the company’s overall results.