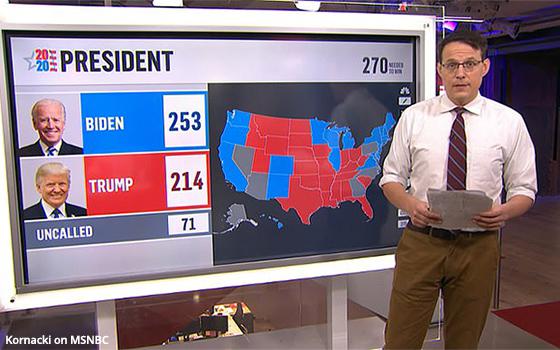 This presidential election had everything -- drama, overtime performances, denials and acceptances. And pants. Khakis to be specific -- making a somewhat unscripted product placement appearance on MSNBC.

The marathon performance by Steve Kornacki, the cable news network’s election board reporter, got major attention for his khakis -- specifically the "palomino brown" color variety. Available in both slim and straight fit from the Gap.

As a result of the election night appearance, and several days afterwards, the Gap saw a 90% increase in sales for that style, all due to the on-air time those khakis commanded.

The perfectly ruffled Kornacki was not only at his post seemingly nonstop over post-election days, but there was also Kornacki cam on him during key election night commercial breaks as he prepared data/information for his next appearance.

The Gap slacks got product placement even during ads for other products.

Considering all the duress brick-and-mortar based retailers have been going through, it’s kind of nice to know old-school working man’s clothing still works for many.

Don’t worry about the run on those pants -- especially when it comes to more ongoing political election data needs. Kornacki says he has got a bunch of them. (His neckwear, however, needs help. His blue-green striped tie was held together by staples)

The dull part for many might be the numbers. MSNBC did benefit -- as other networks did -- from soaring election and post-election viewership. Any product with a significant appeal would get a bump.

Over the last year, Gap did not air any commercials on MSNBC. This makes sense, since the clothing brand generally targets younger adults/teens -- not your core older TV news viewer.

Still, some observers believe Gap should rename the product -- giving credit for those modest priced $59.99 slacks. Kornacki Khakis seems like a branding dream.

Next time around, we hope there is more fashion success clothing appearances for other TV reporters. We’re thinking tams, cardigans, fedoras, ascots and brown loafers.