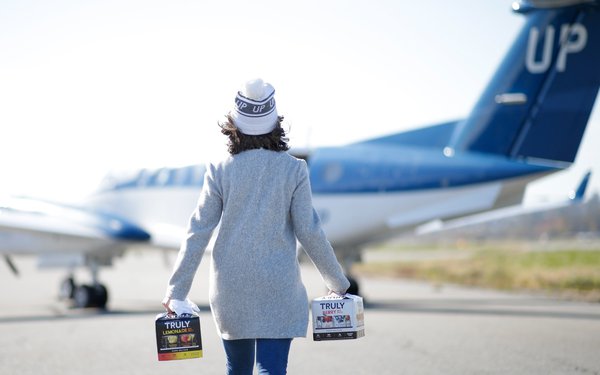 If preliminary indicators are right, millions of people won’t be visiting faraway relatives for the holidays this year. But Truly Hard Seltzer is arranging for five essential workers to get that chance -- by flying them back and forth on private aircraft.

The "Truly Together For The Holidays" contest asks people to nominate an essential worker by sharing the story of why the worker deserves that  trip home. The five with the most worthy stories will get a chance to fly away to see their parents, children or other special people. They’ll get there on planes provided by the private aviation company Wheels Up, which otherwise provides private transportation on a membership basis.

It’s teaming with Truly parent company Boston Beer Co,  to provide the prize. The contest rules say each trip, with the plane "decked out with Truly swag," is worth up to $30,000.

"We have been inspired by all of the people who have stepped up this year and are humbled to help bring a few essentiall workers home for the holidays so they can celebrate and make memories with friends and family,” said Don Lane, vice president of the Truly brand, in a statement.

But during the pandemic, even a contest can be tricky.

"Truly Together" was announced Monday, when the drumbeat of stay-home messages began to quicken. By now, as more cities, states and health experts have amplified that warning, it wouldn’t have been surprising if Truly decided to call off the idea until another, safer time.

“Totally hear you on getting folks to stay home for the holidays and we don’t dispute that one bit,” says Meaghan Quinn, public relations supervisor at the company.

But postpone until later when things seem a little safer? No way.

“We’ve actually been hearing the opposite from essential workers -- so far, feedback has been incredibly positive,” she adds.  “We’ve already received nearly 100 entries since Monday, with some of the most emotive stories about why a private flight to see a parent, grandparent, child or other loved one would mean so much to them.”

The contest winners will be announced after Nov. 28. They have until Jan. 15  to complete their trip.

The Centers for Disease Control and Prevention Thursday recommended against traveling or gathering for Thanksgiving.  Previously, the CDC noted the risk of traveling and recommended precautions to take if someone was still going to do it. But now it says flatly, “Travel may increase your chance of getting and spreading COVID-19. Postponing travel and staying home is the best way to protect yourself and others this year.”

To be clear, the Truly contest won’t be flying winners home for Thanksgiving, and that’s the holiday CDC is specifically addressing now. More than one million new cases have been reported in the last week. But general warnings about not traveling now seem to encompass the broader holiday period.