Only Scrooge Would Say Humbug To Christmas Angel Dolly 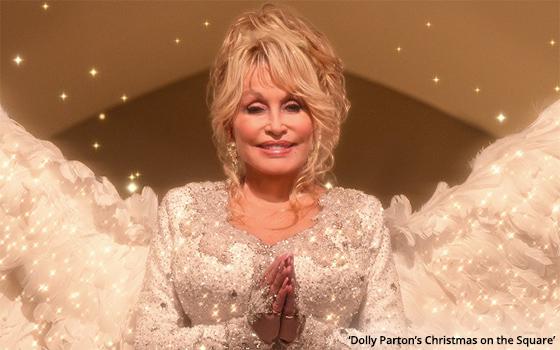 Who would dare put on a musical Christmas TV movie like this one? Only Dolly would!

That would be Dolly Parton, 74, for whom the word "retirement" apparently holds no meaning.

So, she wrote and produced this made-for-TV Christmas musical with her name in the title, like she's Tyler Perry -- “Dolly Parton's Christmas on the Square.”

All 14 songs -- both music and lyrics -- are credited to her. The choreography is by Debbie Allen, who is also credited as the movie's director.

It is also, in a word, awesome. It will almost certainly emerge as one of the TV highlights of the holiday season and one of the most popular original productions to be seen all year on Netflix.

The musical is about a small town and its homey town center that is ringed by shops and happy, diverse townspeople all waiting excitedly for the arrival of Christmas.

Among them is a mysterious beggar woman asking for small change who turns out to be a guardian angel for the town when it comes under threat by a wealthy woman who hates the town and also happens to own the land beneath it.

Just as the townsfolk are preparing for Christmas, the wealthy woman -- played to perfection by Christine Baranski -- goes door-to-door gleefully (and musically) handing out eviction notices.

Can the town's guardian angel intervene in time to save Christmas? What do you think?

The angel happens to be Dolly Parton (pictured above), and if she cannot rein in this mean Lady Scrooge, then no one can.

This movie comes along at just the right time to usher in a holiday season like no other in most of our lifetimes. The movie is designed as unabashed, undisguised escapism. As such, it will be a smash hit.

In this town square, no one wears a mask or interacts at a social distance. Instead, they hug, kiss and dance with pre-COVID abandon.

This movie is so unrealistic that the Lady Scrooge character played by Baranski -- a woman named Regina Fuller -- has already agreed to sell the town and the land it sits upon to a mall developer that plans to build a colossal shopping center.

A mall? Really? In this day and age? Well, maybe that too can succeed, but only if they put Dolly Parton in charge of building it. If they do that, even a new brick-and-mortar mall cannot possibly fail.

“Dolly Parton's Christmas on the Square” started streaming on Netflix on Sunday (November 22).