Sad State Of Basic Cable Today: In A Word, Ridiculousness 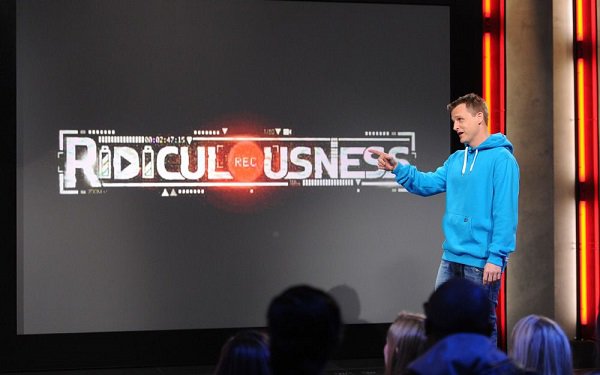 You know that cable television is in trouble when at least two widely distributed basic cable channels are each relying basically on one show apiece.

It is a state of ridiculousness. That happens to be the title of one of the shows referenced above, the always-on, cheapo, video-clip series called “Ridiculousness” on MTV.

This show, hosted by the tireless Rob Dyrdek, is just about the only show now running on ViacomCBS-owned MTV, which was once, very long ago, one of the pioneering cable channels that made people want their cable TV.

Today, however, MTV has been reduced to this: A TV show filling untold hours every day (particularly at night) in which Dyrdek (seen in the photo above) introduces homemade video clips apparently culled from social media, and then chortles over them with a couple of in-studio regulars and an occasional guest.

The vast majority of the videos show people in the act of doing idiotic stunts and then seeming to seriously hurt themselves. The pain and suffering of these people is then treated as something to laugh at.

Needless to say, this show is tasteless. And because it is seen so frequently, it has come to define MTV today. This statement is not meant as a compliment to either the show or MTV.

Moreover, it is highly doubtful that “Ridiculousness” will ever drive cable subscriptions except maybe in the opposite direction -- namely, away from cable rather than toward it.

The other show on which a basic cable network seems to entirely depend these days is “Impractical Jokers” on the WarnerMedia-owned network known as TruTV.

Unlike “Ridiculousness,” “Impractical Jokers” is a very creative show and often provides some of the best and most inventive comedy seen anywhere on TV right now.

More power to the four gifted improvisational performers who make up the “Impractical Jokers” team -- Sal Vulcano, Brian Quinn, James Murray and Joe Gatto -- because they now find themselves in the unusual position of propping up an entire cable network, and presumably being well-paid for it too.

But the lion’s share of the “Impractical Jokers” shows seen more or less constantly on TruTV, particularly in prime-time but at all other times of day too, are repeats.

If you watch TruTV, it is not unusual to see a repeat airing of an “Impractical Jokers” show you saw seemingly just days earlier. While watching TruTV, it is possible to form the impression that nobody works there, and that the whole thing is basically automated and running on auto-pilot.

With programming “lineups” that at the present time consist basically of just one show each, TruTV and MTV are extreme examples of the malaise gripping basic cable today.

As one who grazes through my basic cable channels frequently, the thought often occurs to me that I am literally witnessing an industry in its death throes.

Basic cable today -- and we are talking mostly about the entertainment-network sector of that business -- is made up of old movies that are reshown over and over (we all love Madea, but give her a rest already), off-network repeats of countless police procedurals, “The Big Bang Theory” and “Two and a Half Men” reruns, and commercial breaks that are so long they should be classified as torture.

The end result is certainly an abuse of the end-user that today’s low-rent cable TV channels presumably wish to reach -- i.e., cable subscribers at home who pay steep fees every month for dozens of name-brand cable channels that seem to have abandoned the idea of developing and producing original, attractive content worth paying for.

For advertisers, it is difficult to see how basic cable represents a beneficial environment for commercials, unless the time in those over-long commercial pods is simply too cheap to pass up.

No wonder people are cutting the cord with cable TV. Does that really surprise anyone?