Only In America: TV Series Spurs National Mania For Chess 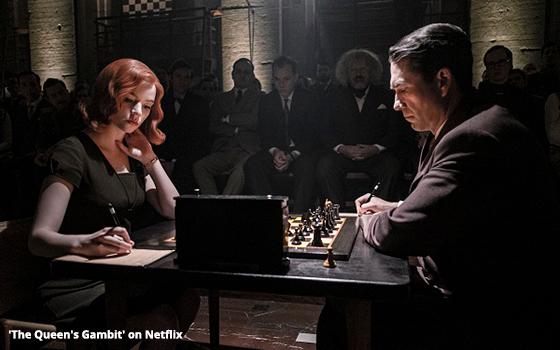 Americans confined at home during the lengthy pandemic are understandably searching for ways to pass time that otherwise might have been spent engaging in out-of-home activities such as shopping, socializing and eating in restaurants.

The researchers tell us they are binge-watching a lot of television, which makes sense because that is a time-sucking, home-based activity if there ever was one.

One friend tells me he and his wife are now bingeing on all five seasons of “The Wire” on HBO Max after recently completing an entire viewing of “The Sopranos.” Evidently, their lives were too busy during the ’00s to have seen these shows the first time around on HBO.

Other friends are decluttering their closets, archiving and conserving family photos, and taking up ancestry/family tree projects.

Some are attempting to learn how to play musical instruments with the assistance of instructional videos on YouTube. In light of this, it was surprising recently to read that the musical-instrument store chain, The Guitar Center, had filed for Chapter 11 bankruptcy.

Surely, there is an opportunity during this pandemic for a seller of guitars. Perhaps what The Guitar Center needed was for a TV show to come along about a plucky young person (preferably a woman) who emerges from obscurity to conquer the guitar world.

This is what has happened in the world of chess, thanks to “The Queen’s Gambit” (pictured above) -- the limited drama series about a young woman from a Kentucky orphanage who grows up to conquer the male-dominated world of international chess competition.

Since its premiere on Netflix on October 23, interest in chess -- purchasing sets, reading and learning about chess, and (presumably) playing it -- has soared. Thus, “The Queen’s Gambit” figures into an analysis of the quest for activities during the pandemic in two ways.

The first is obvious: It is a series that Netflix subscribers have apparently embraced and are bingeing on. They might have binged on it even if there were no pandemic, but the current period of confinement probably helped.

Earlier this week, Netflix said 62 million subscribing households watched the show in its first 28 days. Netflix called this a record for one of its shows.

Second, “The Queen’s Gambit” seems to have turned chess into something of a national mania.

The same announcement from Netflix contended that the show has made the following chess-related impacts: Chess queries on Google have doubled and searches for the term “how to play chess” are the highest they have been in nine years; chess-set inquiries on eBay are up 250%; and a chess website, Chess.com, says new players on the site have seen a five-time increase.

In addition, news reports have been circulating for about a week that, suddenly, chess sets are hard to come by as retailers are running out of them just as the Christmas shopping season is shifting into high gear. What a country, right? In the middle of a pandemic, we are experiencing a run on chess sets. As Don King used to say: “Only in America!”

Further statistical evidence and clarification of a U.S. chess surge came Wednesday from The NPD Group, the New York-based research firm. NPD looked into the “Queen’s Gambit” chess boom and found that sales of chess sets have jumped 87% and sales of chess books have risen 603%.

NPD BookScan says the following book titles are selling strongly since the show’s debut: Bobby Fischer Teaches Chess by Bobby Fischer; Chess Fundamentals, by Jose Capablanca; Chess for Kids by Michael Basman; and The Complete Book of Chess Strategy: Grandmaster Techniques from A to Z by Jeremy Silman.

“The idea that a streaming television series can have an impact on product sales is not a new one, but we are finally able to view it through the data,” concludes Juli Lennett, toys industry advisor for NPD. “The sales of chess books and chess sets, which had previously been flat or declining for years, turned sharply upward as the popular new series gained viewers.”

According to Netflix, “The Queen’s Gambit” took three years to develop, produce and then bring on the air.

Maybe as part of its reorganization, The Guitar Center ought to think about developing a TV series that will make guitars as popular as chess. It might take three years, but the results speak for themselves.