Sad State Of Basic Cable, Part 2: It's All About Streaming 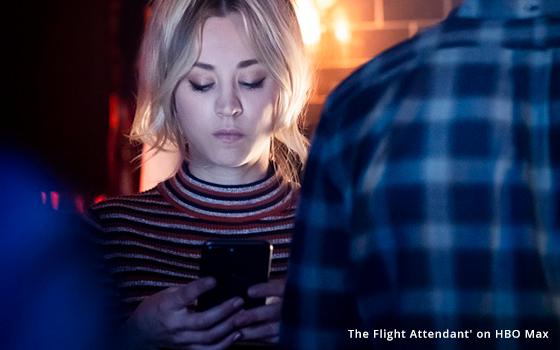 Sequel columns are a rarity in the current history of this TV Blog (dating back to 2014), but every so often, new thoughts on an already-covered subject lead a blogger back to a discussion he already ignited.

For this “Part 2” column following up on a column last week about the sad state of basic cable, you can blame a drunk flight attendant.

She is the title character of a new drama series that came up for review here last week -- “The Flight Attendant,” which premiered on HBO Max, the streaming service, on Thanksgiving. Kaley Cuoco stars in the title role (pictured above).

While watching this show that was produced for subscription streaming, it dawned on me that not too long ago this same show would have felt right at home on any number of other platforms (formerly known as “networks”) such as USA Network, to cite one example -- an ad-supported basic cable network known mainly for airing original and off-network scripted content.

“The Flight Attendant” is about a hard-partying stewardess who wakes up next to a man who has been brutally murdered after an all-night binge that ended in a hotel room in Bangkok. This serialized drama centers on the mystery of who committed this murder, for which she is the prime suspect.

The bloody aftermath of this man’s killing is the kind of casual depiction of crime-scene blood spatter that is commonplace today on commercial TV. The f-word is used casually in “The Flight Attendant” also.

But f-words can be easily excised from a TV show for commercial presentation, and some commercial-supported cable channels are even allowing it these days anyway.

The point is that this show which was produced for HBO Max, and being presented there exclusively, is the kind of show that not too long ago would have been made by and for USA or TNT or any one of a half-dozen or more basic cable networks.

Now, however, the production pipeline for this kind of TV show and so many others is being redirected more and more toward the streaming services that are now owned by every one of the major media companies.

With viewing habits changing, the big companies are increasingly adopting what you might call “digital-first” or more to the point, “streaming-first” strategies. In fact, Disney has even reorganized itself this year toward establishing Disney+, the company’s streaming service, as the company’s highest priority.

Which brings me back to why this column is a sequel to the “Sad State of Basic Cable” column published here last week. It is because part of basic cable’s problem today is that there seem to be far fewer original, quality series being produced just for ad-supported cable TV than there were just a few short years ago.

USA Network and TNT were the most conspicuous of basic cable’s first-run drama networks. FX was too. And even though FX still seems to be in the drama production business, FX series are also being shared with Hulu under a hybrid entity -- “FX on Hulu” -- now that Disney owns FX and Hulu.

Some might say the basic-cable drama pipeline has dried up this year because of COVID-19 and the restrictions the pandemic has brought to bear on the production of TV shows. But COVID does not seem to have slowed the introduction of series on the streaming services.

On the contrary, new shows are coming to the streaming services -- Netflix, Disney+, Apple TV+, HBO Max and others -- every week.

By contrast, new drama series capable of generating any critical heat or viewer buzz for basic cable have virtually disappeared -- adding to the impression that basic cable is morphing into a TV backwater of endless commercial breaks, endless reruns and stale feature films.

cable tv, digital, streaming, television
1 comment about "Sad State Of Basic Cable, Part 2: It's All About Streaming".
Check to receive email when comments are posted.
Next story loading