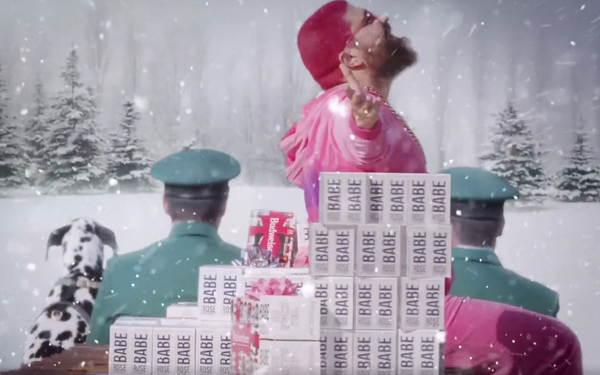 Drizly, the ecommerce alcoholic beverage site, is taking the unusual step of inviting website visitors to order delivery of both Budweiser beer and Babe canned wine by just clicking one button on the beverage menu.

That’s different, but the very idea of teaming old, traditional Budweiser with brash, flamboyant Babe -- both owned by Anheuser-Busch InBev -- is very different.

So are holiday gift items like the Budweiser-Babe socks and wrapping paper that feature both brands’ insignias woven into a holiday scene. They’re part of a small gift selection offered for sale, on the chance they may somehow be perfect for someone on your list.

The “Order Babe & Bud” button is part of a banner-type ad from the brands that’s inserted onto the Drizly pages of lager beer offerings. At checkout, new Drizly users who buy both get a $10 discount.

To keep this odd coupling going, Babe produced ashort video showing Babe founder Josh “The Fat Jewish” Ostrovsky, carrying a case of his wine, catching a ride from the proud drivers of Budweiser’s wagon powered by the famous Clydesdale horses. (That’s him in photos from the video above.)

“This is the first time the Budweiser Clydesdales and hitch have been part of a cross-branded campaign," said Chelsea Phillips, the wine’s general manager. “Both Bud and Babe are iconic in their own ways and have their own fan bases,” but putting them together seemed the holiday-ish thing to do.

Budweiser, on the other hand, started in 1876, and calls itself “the King of Beers” because it is named after the Czech town of Budweis, which in  the 13th century was the home of a brewery that became the imperial brewery of the Holy Roman Empire.

Ostrovsky and his partners were among the first to use ecommerce to sell wine, and it caught the attention of Anheuser-Busch InBev, which had been branching into areas beyond beer.

Since acquiring Babe, the company has poured some money into marketing. It’s the “official wine sponsor” of the NFL, and had that league and Major League Baseball had normal seasons, Babe would have been widely available in many of the stadiums.

Midway into 2020, Phillips told Marketing Daily that Babe had sold more than 7.6 times more than it did the entire year before. Though women are the predominant buyers, she said it’s also popular with African-American consumers.