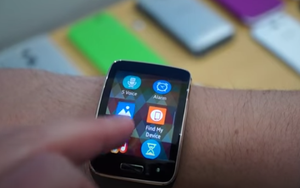 Owners of Samsung Gear smartwatches from around 2013 or so will not be compatible with Samsung’s 2021 smartphones, according to several websites that monitor the big smartphone makers’ every move.

This is bad news for some people. If you have an old Samsung Gear smartwatch and intend to upgrade your phone next year, you’d better think twice -- or pay twice, because your new phone won’t be of much help to your old watch.

Though that might seem to be dirty marketing pool, It probably won’t matter much in the smartphone-smartwatch market.

The website Android Authority says the Galaxy Club report lists five watches that will be affected: the Galaxy Gear from 2013, The Gear 2, Gear 2 Neo, Gear Fit and  Gear S (shown above). Others are OK, apparently.

Samsung hasn’t made the announcement officially or commented in any way, but tech websites seem to think it’s a done deal.

But if you’re the sort who does not exclaim “Out with the old, in with the new” every year, you’ll be OK. Samsung’s existing smartphones, including the current new model Galaxy S20,  will still work fine with your old Samsung smartwatch. And owners of more recent vintage Samsung Galaxy smartwatches will be perfectly fine with newer model Samsung phones.

The website Trusted Reviews says the newest smartphone technology can deal with old smartwatch technology, so it’s unclear why Samsung is pulling the tech plug on a few models.

It’s also not clear how many vintage 2012 or 2013 Samsung Gear smartwatches are out there, but unlike old watches with dials and second hands, they don’t usually become worth a lot more as time ticks by. Improvements in smartwatches make it likely the old Samsung phones are, well, behind the times.

Apple has a fairly dominant lead in the  smartwatch field, but it’s getting competition, finally, from companies including Garmin, Huawei and Samsung. The smartwatch field perked up considerably starting last year, and prices have gone down. If a Samsung user wants to give up their old watch, a new model will cost about $300.