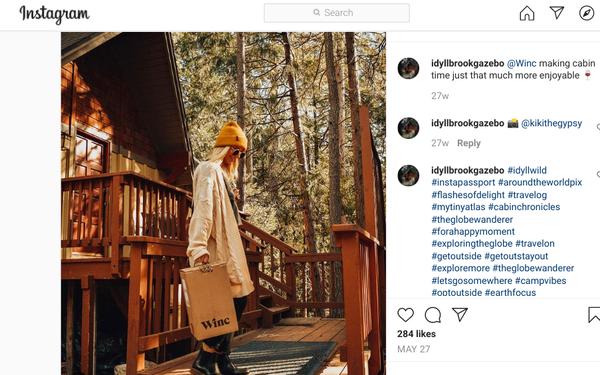 Subscription ecommerce wine business Winc was not having the best of times earlier this year, recalls Eric Miller, the senior manager of partnerships and influencer marketing. Online advertising costs were up, and the efficiency of those ads was spotty.

Winc’s message has always been “A world of wine delivered right to your door," with the site promoted as a “really easy, safe way to learn about wine.”

The pandemic hardened that focus in a hurry. “We still let people know it’s a really easy way to learn about wine, but with convenience taking on a new whole new importance,” he said.

So was Winc’s influencer marketing effort, which has been growing, almost from scratch, in the last year or so.

“When an event like [the pandemic] happened,  influencer became the perfect channel to broadcast to people who were all going through the same thing at the same time…. because it was so much more personal.”

In a bragging email Tuesday, Winc reported a stunning 289% increase in customers over a year.

Some of that growth comes from a combination of smaller micro-influencers (like the one in the photo above) whose pitch reaches fewer followers but possibly lands stronger, and macro influencers like online wine critics, who have more clout and drive membership.

All told, Winc has a roster of 4,000 micro influencers and a couple hundred macro helpers -- not all of them working at the same time -- to pitch Winc. Miller claims Winc’s customer engagement via influencers rose by 221% this year.

The company works with Impact, which helps collect influencer information to measure ROI, and shape content creation and what those influencers are saying or doing. That’s important,  Miller says, because micro-influencers often create content Winc can use again on its own platform, a special benefit this year because the pandemic has made its own productions more difficult to arrange.

Even though choosing wine can be endlessly complex, the influencer role is fairly straightforward. “The main thing we’re selling is the first month of membership,” Miller says. “It’s about general subscription sign-ups. Very rarely are we ever promoting just one bottle.”

A membership gets you four bottles of a wine a month, chosen based on a Palate Profile questionnaire in which members are asked if they like citrus -- or salt -- and are they very adventurous when it comes to food and drink? From that criteria, Winc recommends the monthly selections, but a subscriber can alter the order.

It looks like subscribers have gotten the hang of it. This year so far, the company’s new stat sheet says, it’s served up 24 million glasses of wine -- the equivalent of six million bottles.