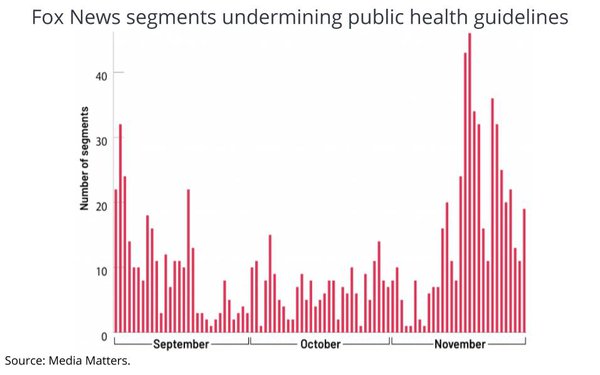 As Fox News Channel wraps up a record year of political news ratings and ad revenues (see related story), I just have to ask what lengths the channel is willing to go to turn a profit? According to a new analysis from Media Matters, it seems it’s willing to undermine our public health and safety to do it.

Importantly, the analysis shows these segments ran in all of Fox’s coverage, including both “straight news coverage, as well its inflammatory prime-time commentary shows.

Putting aside the incidental effect that coverage likely had on social unrest, including armed protests that have taken place at the homes of public officials seeking to regulate and enforce some of those guidelines, how many people have actually become sickened or died from the misinformation televised by Fox News?

We may never know the precise answer to that, but what we do know is that the kind of “fake news” that spreads misleading disinformation can be highly profitable, and that Fox News has generated record ratings and profits in part from it.

During the Association of National Advertisers’ recent Masters of Marketing Conference, a top Facebook executive, Carolyn Everson, disclosed that when the social network looked into fake news publishers spreading disinformation, it discovered that it wasn’t to sow chaos or political disruption, but mainly to make a buck by generating audiences so that they can sell advertising.

While the kind of advertisers participating in the ANA’s conference likely are the type that would avoid placing their ads on those sites, many of them do advertise on Fox News. So I just have to ask, what’s the difference? If anything, directing your economic support for a major “news” outlet that televises information that makes Americans sick or dead, is worse than some fly-by-night opportunist shilling BS for a quick buck.