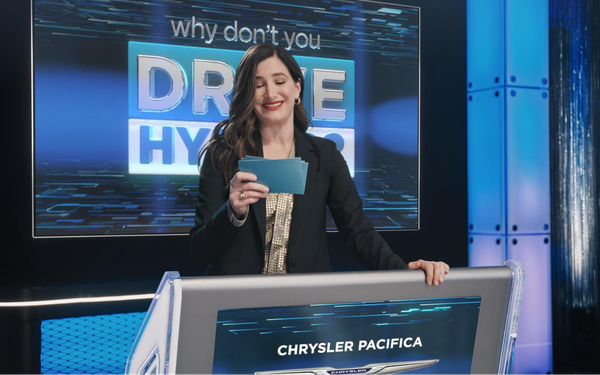 The automaker first used her in March 2018, and has reprised her role as a stressed-out, goofy mom several times. The last work, which features Hahn playing a mom in quarantine, broke in June.  All campaigns featuring Hahn, a real-life mother of two, have been created by Doner.

The campaign is a “fresh and engaging way to educate people about the benefits of hybrid ownership," said Marissa Hunter, head of marketing, FCA - North America.

"With this campaign, we take a direct and light-hearted approach to giving our audiences answers to some of the most-asked questions about hybrid ownership, in a way that is unique to the Pacifica Hybrid and to Kathryn’s comedic talents,” Hunter says in a release.

The 30-second spot, “Game Show,” features Hahn as the host of a question-and-answer program where in a matter-of-fact manner she asks the contestants, “Why don’t you drive a hybrid?”

As each participant responds with some false stigmas attributed to hybrid vehicles, Hahn rejects their responses, points out the many features of the Chrysler Pacifica Hybrid, and says there's no reason not to own one.