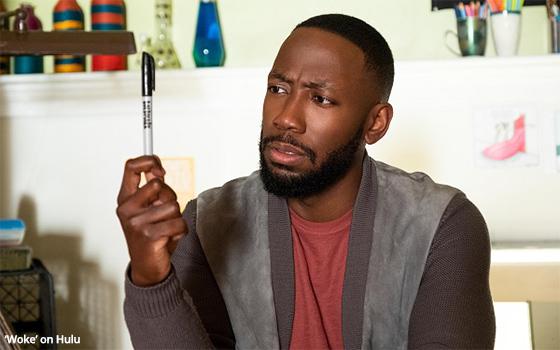 The hazards of advanced technology that outpaces mankind's ability to control it was a recurring theme in some of the best-reviewed shows in the TV Blog in 2020.

They included “Dispatches from Elsewhere” on AMC, in which a group of strangers is brought together for a mysterious urban scavenger hunt by a series of anonymous cell phone robocalls; and “Devs” (FX on Hulu), about an enigmatic tech tycoon who is on the verge of developing technology that will enable him to preprogram human DNA.

Others in the category included “Upload” on Amazon Prime, which depicted heaven as a virtual-reality illusion; “The Capture” on Peacock, about the surveillance culture we all live in now; “Utopia” on Amazon Prime, about comic-book fandom that turns deadly; and “Next” on Fox, about artificial intelligence software that has untethered itself from human control.

Special recognition goes to “Raised By Wolves” on HBO Max, about a post-apocalyptic future in which biological evolution and advanced robot science have created a new race of hybrid android/humans.

These were all great shows and if it is possible to position one of them above the rest while doing nothing to diminish the high opinion stated here for the other ones, then that position goes to “Raised By Wolves,” which was literally an otherworldly experience to watch.

While the aforementioned 2020 TV dramas occupied a category all their own, a number of other made-for-TV (or streaming) dramas were also well-reviewed here, including “War of the Worlds” and “Belgravia” on Epix, “Perry Mason” and “Lovecraft Country” on HBO, “The Pale Horse” on Amazon, “Extracurricular” on Netflix, “Barkskins” on NatGeo and “The Great” on Hulu.

While the year in TV drama was evidently stronger than the year in TV comedy, a new comedy was probably the best-reviewed show of all here in 2020 -- comedy or drama.

The show was “Woke” on Hulu, which starred Lamorne Morris (pictured above) as an African-American cartoonist in San Francisco who is on the cusp of stardom in his field but then has a run-in with police that changes his outlook on life.

He becomes “Woke,” but the subject of the show's title is not dealt with in the grim, serious way we have all become accustomed to.

“The refreshing thing about ‘Woke’ is that it treats its racial subject in ways that are not quite serious, and also not quite lighthearted,” I wrote in a review in September. “It walks a tightrope between those two extremes and never loses its balance, a rare feat for a TV show.”

I even went so far as to declare that “Woke” was “possibly the best new show -- comedy or drama -- that I have seen this year.”

Here at year's end, that has turned out to be true.

At least two other shows that received a stellar reception here in the TV Blog this year deserve very honorable mentions here because they seemed to have appeared out of nowhere (proverbially, of course).

One was a documentary that ran for all of 22 minutes, but emerged out of the thousands of hours of TV coverage of pandemics past and present to be the best one on the subject that the TV Blog came across all year.

It was titled “Pandemic Amnesia: Recovering the Memory of the 1918 Influenza Outbreak.” Produced by Chicago-based Weigel Broadcasting for its digital sub-channel (“diginet”) known as Decades, this short film was a concise, fascinating, fact-filled gem.

“I have been [writing about television] long enough to already know that come next December, this documentary will be at or near the top of my list of the best shows that came my way in 2020,” I wrote back in June with evident prescience.

The other unexpected treat of 2020 was “How To With John Wilson” on HBO.

This series was basically a series of short films made by one man -- a guy named John Wilson -- who expended a lot of shoe leather to traverse the streets of New York City and other places with a handheld video camera to chronicle various aspects of everyday life.

“Ninety-nine times out of a hundred, this approach to creating a TV show never works,” I wrote in October. “But in [John Wilson's] hands, the interactions and behaviors he captures with his camera somehow become more meaningful than they would seem to be at first glance.”

“In the final analysis,” I wrote, “the most winning aspect of this show is that … it is hopeful and optimistic.”

Imagine that -- a hopeful and optimistic TV show in a year such as this one.