One And Done: How Fox Hospital Drama Deals With COVID 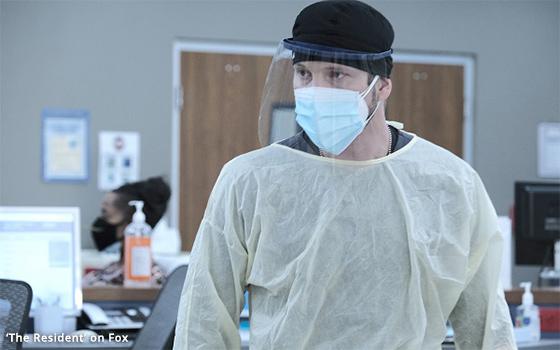 A Fox hospital drama returning this week adopts a strategy for dealing with COVID that was first pioneered by a Fox comedy earlier this month.

It is a time-traveling creative choice that allows the show -- “The Resident” -- to acknowledge the COVID-19 outbreak of 2020 and its impact on the staff of fictional Chastain Park Memorial Hospital, and then move on to a future after the pandemic when masks and plastic face shields are things of the past.

On January 3, the season premiere of the Tim Allen comedy “Last Man Standing” also dealt with COVID-19 from the vantage point of a period of time in the near future after the pandemic was over and done with.

In “Last Man Standing,” the year was 2023, which allowed the characters in the show to make references to the pandemic at a distance in time that none of us in the real world have the luxury of doing here at the outset of 2021.

Then, in the second episode of “Last Man Standing’s” new (and final) season, COVID-19 -- along with its face masks and other accoutrements -- is neither mentioned nor seen. It is as if it never happened.

In a similar vein, the fourth-season premiere of “The Resident” Tuesday on Fox signals its intention to go forward in time with these words splashed across the screen at the start of the show: “Sometime in the future when the COVID-19 pandemic is history …”

What this “future” means is unclear. On “The Resident,” this future time period is not specified, as in the year 2023 that was provided in “Last Man Standing.”

By the looks of the “Resident” episode, however, this future time after COVID-19 appears to be somewhat sooner than 2023.

For the purposes of storytelling, the first scene of the season premiere of “The Resident” takes place in this unspecified future, with the young doctor of the show’s title -- Conrad Hawkins, played by Matt Czuchry (pictured above) -- preparing for his wedding.

We soon learn that this event, which evolved last season in Dr. Hawkins’ engagement to nurse practitioner Nic Nevins (Emily VanCamp), had been delayed because of the COVID emergency.

The episode then flashes back to March and April 2020, when COVID-19 first arrived at the hospital and then flourished and in the process, threatened the lives of various main characters as well as ancillary ones.

Then by the episode’s conclusion, we are back to the future once again for a scene that, among other things, reveals who survived.

But the bulk of the episode between these two future scenes dealt with the terrible first months of the pandemic. The doctors and their fellow healthcare workers are exhausted, protective resources are scarce and the hospital and its capabilities are challenged like never before.

And the show recreates the scenes of cheers and “Thank you” sign-waving that became popular in the real world back then as a way of bucking up the healthcare workers manning the front lines in the pandemic.

It was only eight months ago, but when reliving it on a prime-time television drama, it seems even longer ago still.

Perhaps this is one of the risks or pitfalls of producing TV shows in which the pandemic plays a role. It is such a fast-moving, ever-changing story that by the time a show such as “The Resident” comes to the air with a COVID episode, the show is in danger of seeming dated.

And as a practical matter, networks and producers have probably concluded that doing entire seasons of TV shows in which their stars’ faces are covered by protective masks is simply counter-intuitive when it comes to producing and mounting popular TV shows.

At Fox, apparently, the answer to this quandary is to suggest the presence of COVID-19 in one episode and get it over with.

“The Resident” starts its fourth season on Tuesday (January 12) at 8 p.m. Eastern on Fox.