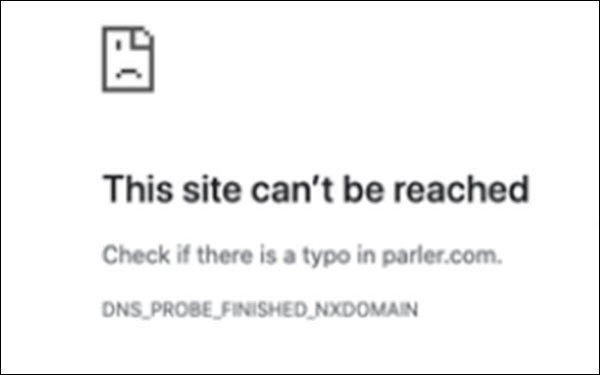 Late Saturday, Amazon announced that it would remove the controversial right-wing social platform from its cloud hosting service, Amazon Web Services, by 11:59 PM Pacific time on Sunday, because of repeated violations of the platform’s rules. Amazon flagged 98 instances of posts on the app that "clearly encourage and incite violence."

Prior to Amazon’s announcement, both Apple and Google removed Parler from their app stores, citing the platform’s failure to stem user posts encouraging violence.

As Facebook and Twitter have become somewhat tougher about policing calls for violence and dangerous conspiracy theories — including the lie that Joe Biden did not fairly win the national election — Parler has become the de facto platform for many Trump supporters.

On Sunday, Parler’s CEO John Matze, told The New York Times that he was “racing to save the data of Parler’s roughly 15 million users from Amazon’s computers. He was also calling company after company to find one willing to support Parler with hundreds of computer servers.”

On Monday morning, Matze said in a statement cited by CNBC that his app will be down "longer than expected."

"This is not due to software restrictions — we have our software and everyone’s data ready to go," he added. "Rather it’s that Amazon’s, Google’s and Apple’s statements to the press about dropping our access has caused most of our other vendors to drop their support for us as well. Most people with enough servers to host us have shut their doors to us. We will update everyone and update the press when we are back online.”

In a post late Saturday, Matze, who has claimed that Parler does not condone or accept violence, had accused Amazon, Google and Apple of working together to “try and ensure they don’t have competition.”

He repeated his claim that Parler is dedicated to “free speech and free information” and vowed that it would be back, although it would likely shut down “for up to a week as we rebuild from scratch.”

Separately, San Francisco police are preparing for a possible pro-Trump demonstration on Monday at Twitter's headquarters in response to Twitter's having banned Trump from its platform as of last Friday.

The building has been more or less empty since workers were sent home to work when the pandemic began early last year.

A spokesperson told Yahoo News that the San Francisco Police Department has been in contact with representatives from Twitter and will have "sufficient resources available to respond to any demonstrations as well as calls for service citywide." The department is "committed to facilitating the public’s right to First Amendment expressions of free speech" and asks "that everyone exercising their First Amendment rights be considerate, respectful, and mindful of the safety of others," the email added.