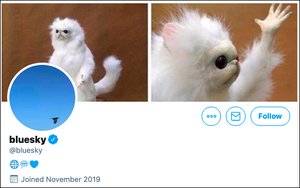 In his first public statements since permanently removing @realDonaldTrump from Twitter, CEO Jack Dorsey expressed some ambivalence, implied some ambiguous, but big changes for the microblogging platform, and also announced a skunkworks project to incubate an alternative platform -- codenamed "@bluesky" -- within it.

"I do not celebrate or feel pride in our having to ban @realDonaldTrump from Twitter, or how we got here. After a clear warning we’d take this action, we made a decision with the best information we had based on threats to physical safety both on and off Twitter. Was this correct?," Dorsey asked his community in the first of a series of tweets Wednesday evening, adding: "I believe this was the right decision for Twitter. We faced an extraordinary and untenable circumstance, forcing us to focus all of our actions on public safety. Offline harm as a result of online speech is demonstrably real, and what drives our policy and enforcement above all."

In the long, soul-searching thread, @jack raised some existential questions about the future of Twitter, other platforms and the nature of free online speech, and also embedded a tweet he made Monday, which likely got overlooked in the news of this week, but which took on new meaning in light of the President's second impeachment and the future of a post-@realDonaldTrump Twitter.

"Twitter is funding a small independent team of up to five open source architects, engineers, and designers to develop an open and decentralized standard for social media. The goal is for Twitter to ultimately be a client of this standard," Dorsey disclosed midway through the long tweet thread, alluding that the new platform would be much more open than than conventional social media platforms, yet would somehow idealistically enhance the public discourse.

"We’d expect this team not only to develop a decentralized standard for social media, but to also build open community around it, inclusive of companies & organizations, researchers, civil society leaders, all who are thinking deeply about the consequences, positive and negative."

The thread included more allusion and aspiration than explicit details, but will no doubt be a project to follow as it gains more substance.

The @bluesky account was actually added to Twitter in November 2019, and tweeted a manifesto of sorts, in February 2020:

"In the spirit of decentralization, we had a crazy idea: what if we brought strangers together in a virtual space to hash out a shared vision for bluesky?"