Nefrina Recalled To Life Through Magic Of Hologram Technology 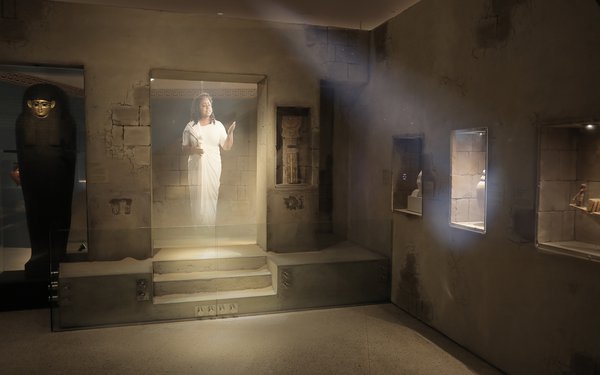 Pennsylvania’s Reading Public Museum is using cutting-edge technology to help retain and grow their audience by introducing a hologram mummy.

The project, developed with digital agency NeoPangea, seeks to go deeper than a typical exhibit by transforming a real mummy — named Nefrina — into a digital recreation able to tell her own story.

Museum officials also sought to ensure the hologram looked like the real person, seeking to avoid the Hollywood whitewashing that remakes these mummies into attractive white individuals. To that end, Philadelphia actress Nichelle Nichols was cast for her “uncanny resemblance” to the Egyptian priestess who died some 2,500 years ago.

The agency also meticulously researched her costume for historical accuracy as well as worked with late forensic scientist and artist Frank Bender to understand what she looked like as he and a team from the University of Manitoba created replicas of her skull and facial reconstructions. They investigated Nefrina’s CT scans using a special 3D table provided to them by Oley Valley High School as well.

NeoPangea then used a combination of computer controlled lights and projectors that play high resolution video onto a special hologram film.

While the digital side of this exhibit was built off-site using augmented-reality, Burkey Construction, a local construction company, installed a life-sized, permanent installation that agency leaders say are as intricate and detailed as a Disney Imagineer.

The experience opens with Nefrina walking out from the darkness to tell her life story before revealing her cause of death. The multimedia experience also illuminates select artifacts as they align with the details of Nefrina’s story.