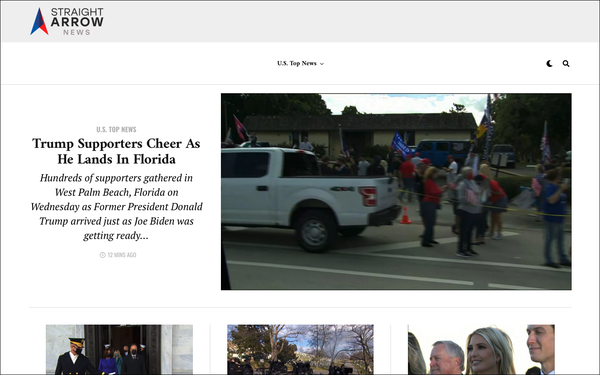 CORRECTION: An earlier version of this story showed the wrong year for the start of DNAinfo. The website was started in 2009.

Joe Ricketts, the billionaire philanthropist-businessman who founded TD Ameritrade, plans to start a digital news outlet called Straight Arrow News. He is hiring staff to start the national news publisher, which will be based in Omaha, Nebraska.

“I think there’s a gap in the market — there is no source for unbiased, fact-based news,” Ricketts said an email interview with the Omaha World-Herald, which is published by Lee Enterprises. “And I believe there’s a business opportunity there.”
Ricketts is starting the website amid a difficult period for news publishers, which have seen steep declines in advertising revenue. The pandemic and its negative effect on the economy were especially damaging, with one study indicating that print, digital and broadcast newsrooms shed more than 16,000 jobs last year.

Straight Arrow's website does not show any advertising, and its editorial content consists of news videos from the Associated Press. Online job ads indicate the publisher is looking for a video editor, senior producer, news reporter and motion graphics designer for the site.

The politically conservative Ricketts has experience as the owner of a news venture.

Amid burgeoning investment in digital media startups, he started DNAinfo in 2009 with plans to become a network of hyperlocal news sites. DNAinfo reported about neighborhoods in Chicago and New York, but didn't expand beyond those cities. Ricketts later acquired Gothamist, another local news site that started in New York.

After workers at DNAinfo and Gothamist voted to join a union, Ricketts abruptly shut down the sites in 2017. DNAinfo had never been profitable in efforts to develop an ad-supported model for local news, The New York Times reported at the time. The following year, three public radio stations acquired Gothamist's websites and archives amid plans to revive their coverage.

Ricketts said other members of his family won't be involved with Straight Arrow News, the World-Herald reported. He and his four children own the Chicago Cubs baseball team. His son Pete Ricketts is the governor of Nebraska, while Todd Ricketts is finance chair of the Republican National Committee.

“I’ve built my career on the idea that a good business is one that serves an unmet customer need,” he told the World-Herald. “The market (now) is only giving them polarized, opinionated coverage.”