Formulaic And Familiar, CBS' New 'Equalizer' Is Sure Thing 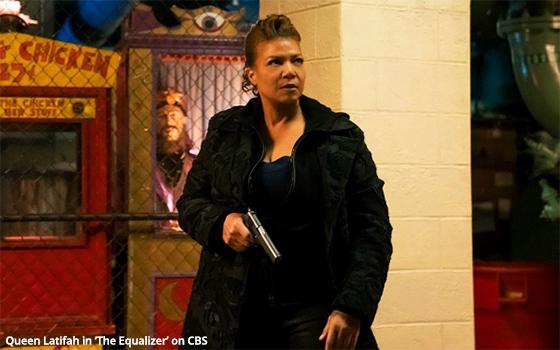 From straight out of the CBS action-drama playbook comes “The Equalizer,” starring Queen Latifah.

The playbook analogy is appropriate because this new “Equalizer” has been given the coveted time period after this Sunday's Super Bowl to make its debut.

And while the record of success or failure is mixed for the many series that have debuted after the Super Bowl over the years, the lead-in audience that the big game provides is second to none (at least in theory).

By all appearances, “The Equalizer” will likely be one of the post-Super Bowl series that will succeed after its high-profile launch.

In fact, it probably would succeed if it debuted in any old time period, such as the one it will eventually occupy at 8 p.m. Sundays starting February 14, a week after the Super Bowl.

With Queen Latifah in the title role played previously by Edward Woodward in the first “Equalizer” TV series in the 1980s and then Denzel Washington in two feature films, the new “Equalizer” really cannot miss.

Latifah, 50 (seen in the photo above), assumes the role as if she has been playing it all her life. And the scenario that CBS and the show's producers have concocted for this new “Equalizer” 2.0 will seem oh-so familiar to anyone who customarily watches CBS dramas.

This is not a complaint, however. Instead, it is the usual sensation of awe that I feel every time I watch a new CBS action drama and marvel at the precision that the network applies to the development of these things.

In “The Equalizer,” we have a strong, crusading, highly skilled main character, Robyn McCall (Latifah), who is a former super-agent for the CIA.

And like so many other lead characters in CBS shows of this type, she is simply the best at her profession that the agency -- if not the world -- has ever seen.

Conforming to the same CBS formula, McCall is aided by three other recurring “best-in-the-world” supporting characters in the pilot that the TV Blog previewed.

These were a veteran, older ex-CIA agent with whom she worked at the agency (played by Chris Noth); an unorthodox tech-genius super-hacker (played by Adam Goldberg) who can get agent McCall any information she wants from around the world at the press of a few buttons, and perform a host of other high-tech parlor tricks too; and a brilliant, sharp-shooting, smartly dressed female former intelligence agent who is a Jacqueline of All Trades when it comes to special ops (played by Liza Lapira).

Together, they work so effectively that they are always more than a few steps ahead of all other law enforcement and intelligence agencies, either local or national.

This new “Equalizer” takes place in and around New York City, where it is also being filmed. The pilot has McCall coming out of a vague retirement -- not from Central Intelligence but from another, more recent job as CEO of an international, charitable non-profit.

In the episode, she stumbles upon a teenage girl in trouble and soon finds herself embroiled in an elaborate plot that has been set in motion by a famous but ultimately evil tech tycoon who is also a renowned genius (this kind of character is also a staple of TV these days).

McCall's intervention in this young woman's crisis gives her the idea of establishing herself as a covert help-mate for people in so much trouble that notifying the police would be inadequate.

And a new “Equalizer” is born. Look for it to grow and prosper for years to come.